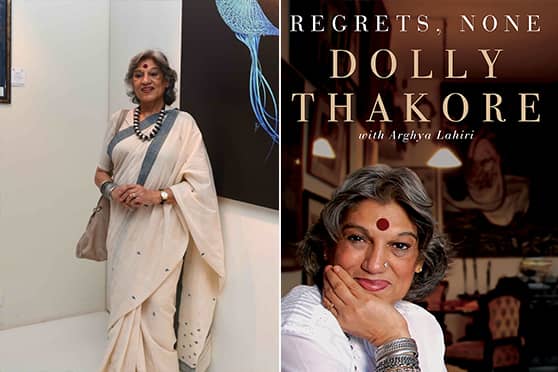 Dolly Thakore did her first All India Radio broadcast in 1962 and then moved on to television and casting; Thakore’s memoir, Regrets, None. Source: Facebook, Amazon

Advertisement
Summary
Dolly Thakore’s memoir Regrets, None was published by HarperCollins in September 2021
She has worked in BBC London, All India Radio, television and advertising alongside theatre

Dolly Thakore is all bright-eyed about her new digital play. What’s even more amazing is her relentless pursuit of new mediums to communicate. Radio, television, theatre, film, web series – you name it and she’s done it.

Most recently, she has written a book chronicling her illustrious journey of almost eight decades as a veteran actor, newscaster, columnist and casting director, with precious years in advertising, communications and public relations.

In a freewheeling Zoom chat with Edugraph, Thakore looks back at her eventful life and discusses what went into her memoir Regrets, None, published by HarperCollins.

Edugraph: From BBC London to advertising in India, working with All India Radio and of course theatre – you have been a communicator for more than two decades. Which of these is your favourite mode of communication?

Dolly Thakore: I think I have been a communicator for more than four decades now! The last two decades have not really seen me doing very much. I achieved quite a lot in the Seventies, Eighties and Nineties. I started my career in communications. In 1962, I did my first All India Radio (AIR) broadcast. And from there on, it’s been radio and then television.

I started writing a little later. I’ve written articles at bus stops because I had to submit them to what used to be Afternoon and Midday and Indian Express. Those days, we didn’t have the computer or laptops, so I just wrote it out.

How do you think TV hosting has changed over the decades?

Dolly Thakore: Look at the technology, look where it’s gone! The opportunities that are available for a lot of young people, especially young women now, that is what’s so exciting about this new age. The quality that is coming out of the population, it’s amazing! I’m sad that I’m not 30 years old now. What a lot of opportunities there are now, truly.

But I haven’t missed anything. I’ve done my bit; I’ve enjoyed every minute of my life. I’ve been on radio, television, I’ve done theatre, a bit of film. I’ve been in a web series, which is the newest kind of thing happening. So, anything to do with communication, I’ve had my foothold in there.

You are also doing a digital play called Turning Point, written by Meher Pestonji. Do tell us more about it.

Dolly Thakore: Exactly. At my age, I’m doing a digital play and it’s a real challenge. My director, Sumit Lai Roy, is in Kolkata; my stage manager is in Chennai; the technical director is in Bhubaneshwar; I am in Mumbai and the lead actor of the play, who portrays the role of a tetraplegic, is somewhere near Bangalore. And that’s what makes it so amazing.

The play is such a touching approach to disability and a very important message about acceptance. I hope that people will make the time to watch it and be moved by it. It’s received a lot of acceptance from people abroad – we’re doing it for America, we’re doing it for Australia. It feels so good that your work is going to be seen by people all over the world.

What’s your message for youngsters who are taking baby steps in theatre in a post-pandemic world?

Dolly Thakore: I feel sad that they haven’t had the practical experiences that we have had. Even two years ago, we could connect, plan, and rehearse physically. We could hug each other and share much more because it was a totally different world. Now, everything is either digital or on the telephone. There is no person-to-person connection, which is essential for the craft. And I miss that for today’s young people; there’s a whole lot that they are missing out on.

But today’s generation is a lot more tech-savvy; they are on their little mobile phones and computers all the time. They know so much more about the digital world and find a way to communicate alright!

How does one really stay authentic while writing a memoir?

Dolly Thakore: I have never been embarrassed, ashamed or insecure about anything that I have done. It was all there, so I wanted to share it with people. And I have a very good memory – I remember dates, years, places, faces. I’m 78 now and till about 75 years, I could remember every single detail. Every experience that I have written about is so vivid, so alive in my memory.

I began writing my memoir in 1982, I suppose in an emotional outburst, and then I stopped. I didn’t write for about 10 years. Then I wrote a bit more and stopped again. Till that time, everything was hand-written. Then, when the computer crept in, I began to use an electric typewriter first, and then a computer. I stopped again and wrote perhaps 30 years later. Three-four years ago, my son said, “Mamma, why don’t you complete the memoir? People may appreciate it because you’ve achieved so much.”

I had piles and piles of notes. He got a friend of his, Arghya Lahiri, to help sift through all of that. Arghya has co-written the book with me. He is a director, a lighting expert; he has worked with me in theatre and we share a terrific bond. I’ve known him for 20 years and he was about 20 when we met. I gave him all my material and he edited the book.

I have always shared my choices and decisions with my head held high. It’s taken me eight decades of living, forty years of sifting through memories, and finally Arghya, to distill it all into a book. I hope people will enjoy reading – not just the adventures of my life – but also getting to know the incredible cast of characters that I met along the way.

In your memoir, you have written about training Rohini Hattangadi, who was then a rather raw talent, while casting for Richard Attenborough’s Gandhi. How does theatre training give today’s young actors direction?

Dolly Thakore: Today, the OTT platforms are making good use of all the out-of-work actors – good actors who couldn’t make it to say an Aamir Khan production or a Salman Khan film or any of these blockbusters. They are such brilliant actors and these web series are bringing out the best in them.

Similarly, for theatre, all these corporate houses are now hiring well-known and not-so-well-known actors to come and train their executives in speaking, preparation, delivery and articulation. So, theatre training has opened up a whole new world for actors now.

What is your advice for today’s youngsters who want to specialise in TV journalism?

Dolly Thakore: My advice to all young people is – enjoy what you’re doing and do it with dedication, do it with learning. You must know your craft. You can’t go on to deliver any news item without knowing the background about it. I used to almost know my news by heart, and that was before there were teleprompters. I never had to look at my paper and say the news of the day. I knew my facts and figures and that comes from paying attention to it. I think that is why my generation of news readers were so good, because they did their homework.

We all remember Pranoy Roy when he started NDTV. Vinod Dua, Vikram Chandra, Vishnu Som, Salma Sultana, Neethi Ravindran – we remember all of them because they were all trained in the way we were trained. So, it’s not a question of getting a script or reading a teleprompter. You must know your material.