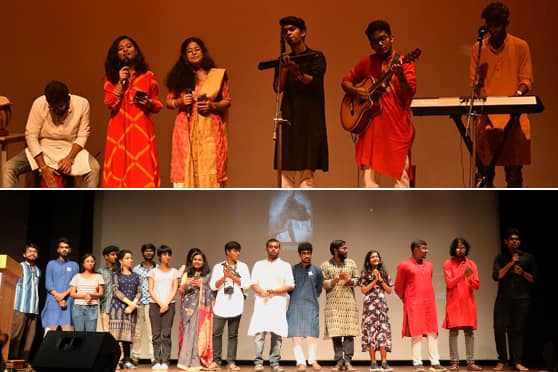 Advertisement
Summary
Gitanjali saw students reciting Tagore’s poems, singing his songs and dancing to them
Ray-trospective had students painting and sketching their vision of Satyajit Ray’s films based on Tagore’s works

Heritage Institute of Technology students paid tribute to Rabindranath Tagore and Satyajit Ray with Gitanjali, a poetry, music and dance event, and Ray-trospective, an art and film initiative, on May 19 and 20.

Seventy students participated in the two-day event organised by Pravasana, the photography, film-making and art club of Heritage Institute of Technology along with the literary, music and dance clubs.

“We are thankful for Ray’s and Tagore’s contributions to the fields of film, music and art. We dedicate this day to them,” said Debalina Das, a third-year Biotechnology Engineering student and coordinator of Pravasana.

Members of Anahita, the literary club; Resonance, the music club; and Ghungroo, the dance club, recited Tagore’s poems, sang his songs and danced to them as part of Gitanjali. The stage came alive with renditions of Tagore’s Sonar Tori, Ononto Prem, Taalgach and Birpurush.

Students sketched and painted their takes on Satyajit Ray’s movies based on Tagore’s works at Ray-trospective. Two films made by the students using Ray’s film-making techniques, Anontor and Iti-britta, were screened on the second day.

“The storyline of Anontor was inspired by the ideological visions in Ray’s Devi (1960). The characterisation was influenced by Apu and Durga of Pather Panchali. The crux of the film is that of present-day societal structure. From Satyajit Ray, I imbibed his compositional ideas and techniques of framing. We were 19 of us who worked on the 25-minute-long film, which was shot on three Nikon cameras. The film has also been shot in monochrome keeping in mind Ray’s Pather Panchali,” said Sourav Sarkar, a second-year Electrical Engineering student, who directed Anontor.

Iti-britta is a 34-minute film directed by Anujit Maity, a third-year Chemical Engineering student. A 35-member group took six days to complete it. “This film explores science fiction and mythology. This zero-budget film has been made with camera lenses, tripods, gimbal, lights, reflectors, microphones and recorders that were available with the team members,” said Maity.