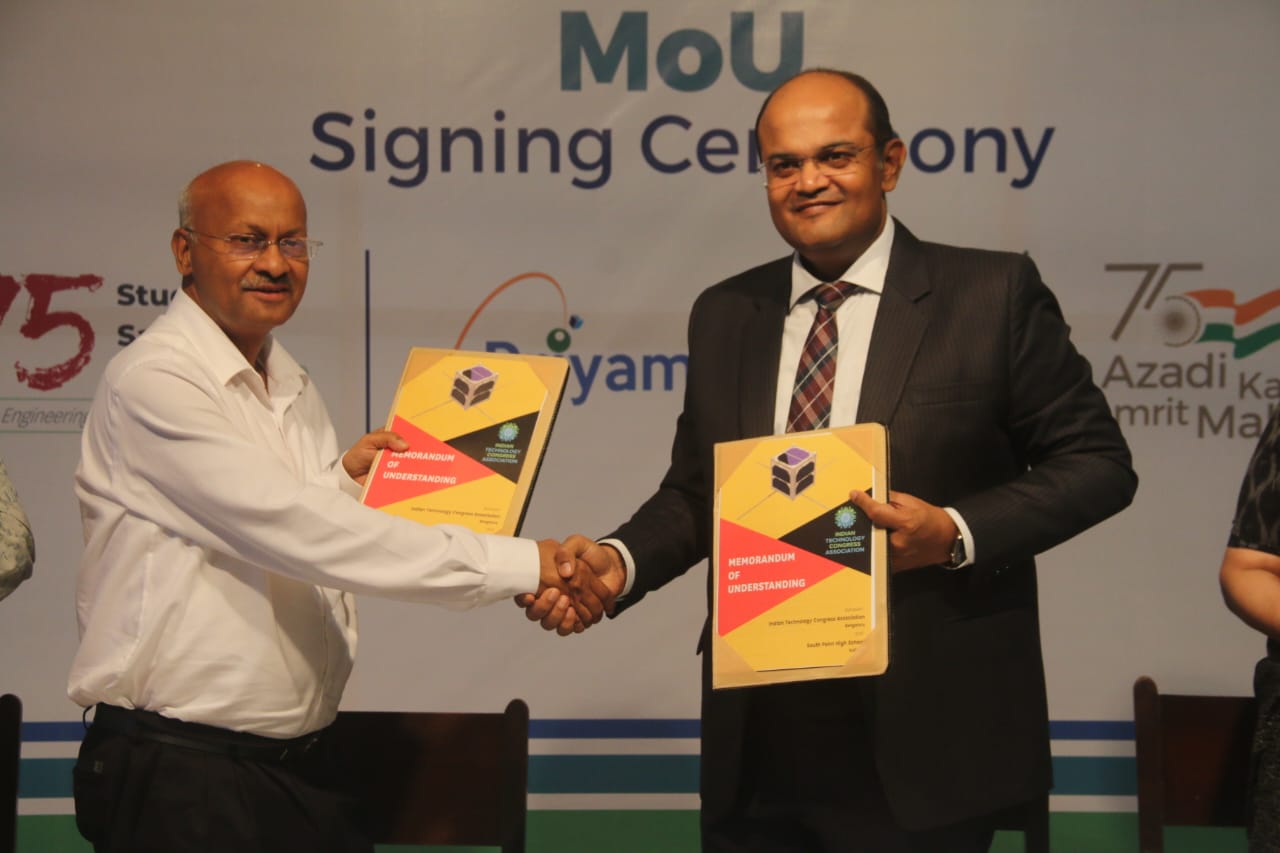 Advertisement
Summary
South Point High School, Kolkata is all set to step into Space, with their own student nano-Satellite, named PriyamvadaSat
A classroom model of the satellite will also be available at the school Space Lab for the faculty and students to assemble/reassemble, as part of the standard lab practices

South Point High School, Kolkata on the eve of the 70th year of its foundation, and in the 75th year of India’s Independence, becomes the first school from Kolkata to step into Space, with their own student nano-Satellite, named PriyamvadaSat. On Tuesday, August 2, 2022, a Memorandum of Understanding was signed at the school premises between Indian Technology Congress Association (ITCA), represented by its President Dr. L.V. Muralikrishna Reddy; and South Point High School represented by the Vice-Chairman of its Managing Committee, Mr Krishna Damani.

ITCA has been entrusted with the responsibility of executing the launch of 75 student satellites into low Earth orbits, as a part of the Azadi ka Amrit Mahotsav initiative of the Government of India, to commemorate the 75 years of India’s freedom. The monitoring of the entire project will be carried out by ISRO. The proposed satellite has been named in the memory of late Smt Priyamvada Birla, former President of South Point Education Society and Chairman and Promoter of the M P Birla group.

South Point High School is excited to be able to bring the future a little closer to its students. A Ground Station cum Space Lab will be established on the premises of the school for students to monitor PriyamvadaSat, as well as to harvest the data sent by it. A classroom model of the satellite will also be available at the Space Lab for the faculty and students to assemble/reassemble, as part of the standard lab practices. Classes XI and XII students of the school will also be involved during the design and fabrication stage. A group of students and chosen members of the faculty will also receive intense training from ITCA, such that they can be involved first hand when the satellite is in the process of being conceptualised and designed. This has great relevance as students will have a first-hand exposure to space science as well as coding.

Students successful in the various training/courses structured as part of the PriyamvadaSat Mission will be receiving a joint course certification from ITCA, SPHS and the Technology Partner(s) delivering the courses. The Space Lab at the School will play the unique role of giving future generations of students a first-hand experience into space sciences. 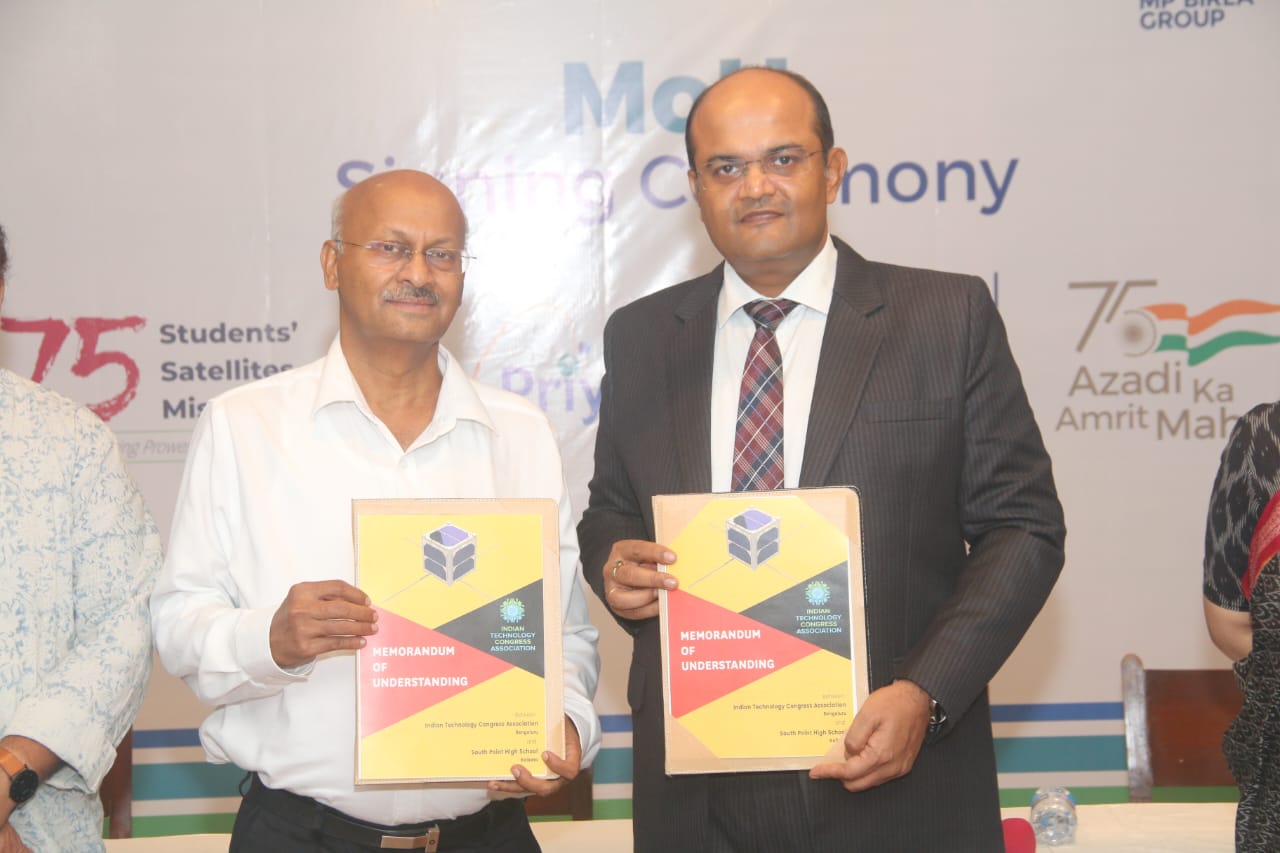 The monitoring of the entire project will be carried out by ISRO Source: South Point High School

Addressing the Media Mr. Krishna Damani, Trustee, South Point High School said, “This effort will remain a milestone in the history of South Point High School. It will ensure a greater emphasis at the School on science-based education and experience- based learning, to foster an innovation culture and give exposure to the future generation of students in the ever-expanding space arena and allied sectors. The School has presently undertaken a relocation project and it is expected that by 2024, the ultra-modern Priyamvada Birla Campus of South Point spread over 6.65 acres of land at Mukundapur will be ready to welcome the students from the present campuses.”

The 75 Students' Satellites Mission, a unique initiative for experiential and hands-on learning is in perfect harmony with the Government of India's New Education Policy. This mission was referenced by the Honourable Prime Minister during his address to global leaders at the 76th United Nations General Assembly in September 2021. ITCA has built an ecosystem for development and deployment of nano-satellites via engagement with space specialists from across the globe. The Department of Space, GOI, has provided significant cooperation via its agencies ISRO, IN-Space, and NSIL to ensure the mission's fulfilment. ISRO has formed a Project Monitoring Committee (PMC) to guide and oversee this one-of-a-kind mission.