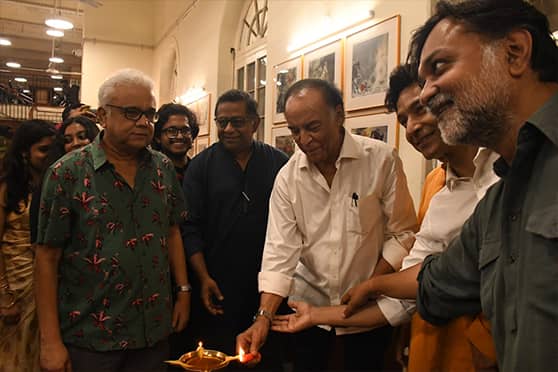 The speakers included actors Barun Chanda, Tota Roy Choudhury and Siddhartha Chatterjee and filmmakers Srijit Mukherji, Kamaleswar Mukherjee, and scholar Debasis Mukhopadhyay. The discussion was followed by the reopening of the Presidency University Museum gallery, which had been closed because of the pandemic.

Satyajit Ray's assignments began with reading the background of the script. I remember, Satyajit Ray asked me to read two stories, Seemabaddha and Sada Barir Kalo Rasta from sharodiya Desh. After the first reading of his script, the screen version turned out to be so different from the novel. He never believed in sharing his scripts because he didn’t want actors to blindly learn by rote.

I was not familiar with the character of Topse or the story of Sonar Kella before the shooting began. Much later, I realised Ray’s script had a different set of characters, climax and background from the original book. As an actor, my rendition of Topse was based completely on natural intuition and mannerism. The studio, sets and lights were all new to me.

Every art form expresses a story, be it novel, poem, dance, music, serial or movie. What sets these apart are the tools and techniques used in the process. Literature can provide an idea, a skeleton or even some characters, but cinema includes a cinematic edge. The rhythm and the literary tools get imprinted with the camera usage, the shooting, or even through lights in a movie. Ray's iconic creation, Seemabaddha, encompasses three variations of metaphor used in the book — icon, index and symbol — with a completely different perception.

Adapting a story from the text to the screen can involve interpretation. Adaptation or interpretation as a technique encompasses a different journey altogether, with individual variations. As a director, while recreating Ray's short stories, I took the help of the impressionist method. For Feluda, I adopted the entire text quite loyally. The shooting process sends me into a euphoric realm. I try to be completely true to my childhood interpretation of Feluda.

The best cast for Feluda was Soumitra Chatterjee and Sabyasachi Chakraborty. Sabyasachida with his baritone, height, sharpness and the sparkle in his eyes, and Soumitrada with his curiosity and thirst for knowledge, mesmerised me. Throughout the process of filming, an actor can pull off his best if he immerses himself in the director’s vision completely. I consider myself lucky to be working with Srijit Mukherjee, who is such a die-hard fan of Feluda.