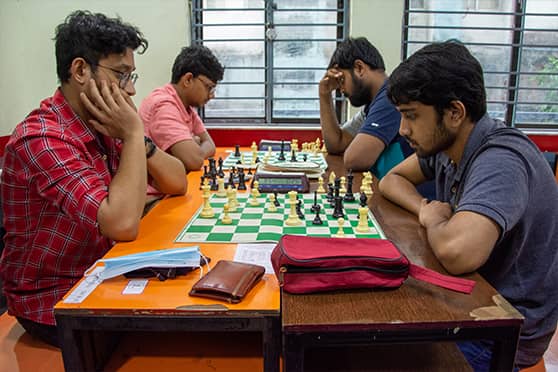 A grandmaster and four international masters were among 88 players plotting their moves at Chaturanga 2022, the first edition of an inter-alumni chess tournament hosted by Nava Nalanda Alumni Association and Nava Nalanda Group of Schools on April 16 and 17. Edugraph was the digital partner of the event.

The tournament was held in the Swiss system, a format where every participant plays a given number of rounds and the players who accumulate the highest scores win.

Mitrabha, who recently competed in the National Rapid and Blitz Chess Championships 2022 in Mumbai. Recalling the final round at Chaturanga 2022, where he almost lost his winning streak, Mitrabha said: “You have to be careful of your own and your opponent’s steps in the game. In the last round, I got ahead of myself and miscalculated a move in the game. It was a draw till my opponent made a mistake that led me to victory. I am proud to represent South Point again even after passing out, and overall, it was a nostalgic experience.”