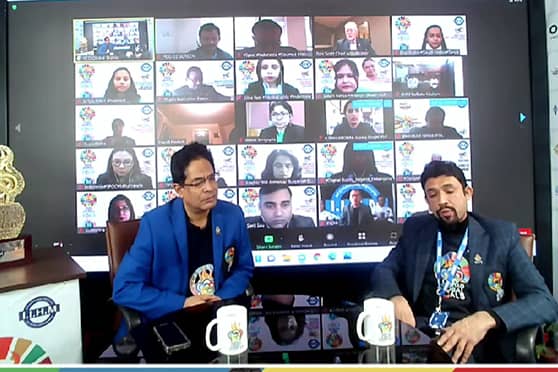 Suborno Bose, founder and chief mentor of IIHM and Indismart Group, during the announcement of results of YCO 2022 Grand Finale and Plate Trophy qualifiers. Source: YouTube

The top 10 finalists of the 8th International Young Chef Olympiad (YCO) presented by the International Institute of Hotel Management (IIHM) have been declared.

Young chefs from over 40 countries crossed ladles on January 31 and February 1 to make it to the grand finale. Contestants placed in the 11th to 20th positions were also named and will fight it out for the Plate Trophy.

The next round of the culinary battle will be held on February 3 and 4. The winners will be awarded cash prizes and digital certificates. The results will be announced on February 5.

“The spirit of the Olympiad is definitely one of giving your best and that is what everyone has done. It’s a technology Olympiad. Apart from the culinary angle, the entire virtual Olympiad has been conducted in a way to ensure transparency that everything is transparent. The social and digital team have done well. They have brought the world together through technology,” said Suborno Bose, founder and chief mentor of IIHM and the Indismart Group.

In keeping with the United Nations Sustainable Development Goals, the teams reinvented, innovated, added creative touches and brought sustainability on the platter through the preliminary round of the competition.

The results were declared in the presence of David Foskett, MBE, chairperson of the jury, and Ron Scott, chief adjudicator, YCO.

Of the 40-plus countries that took part in the Olympiad, the mentor-student Grand Finale qualifiers are as follows: