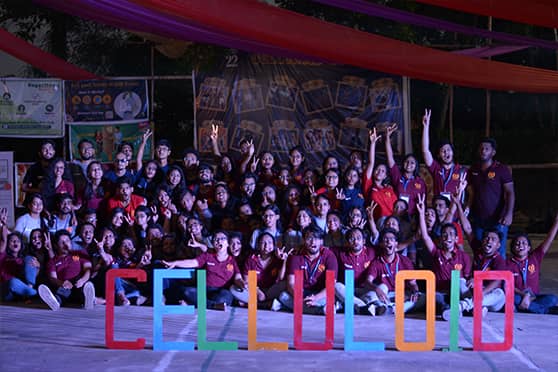 Advertisement
Summary
The theme for the fest was ‘Enter into the Enchanting World of Web Series’.
Over 3000 students from colleges across the city took part in 13 events over three days

Web Series was the focus of Celluloid’22, an international film festival hosted by the Future Institute of Engineering and Management (FIEM) from May 21 to 23.

Organised by Estrella Productions, the film club of the institute, the festival saw over 3,000 participants across 13 events. The theme for the fest was ‘Enter into the Enchanting World of Web Series’. Edugraph was the digital media partner for the event.

“We have been organising Celluloid since 2017. Short films were submitted from countries like United Arab Emirates, Bangladesh, the USA, and Myanmar. We picked this year’s theme keeping in mind our love and passion for this form of storytelling,” said Kunal Ghosh, a third-year Electronics and Communication Engineering student, who was the marketing and branding head of Celluloid’22.

Amity University, Presidency University, The Bhawanipur Education Society College and Techno India Salt Lake were among the participating institutes. The festival was inaugurated by director Srijit Mukherji on May 21. Films selected under Screen-e-Khas, a short film competition, were screened at the fest. Awards under the category of Best Film, Best Actor, Best Director, Best Cinematographer, Best Student Film and Best Editor were handed over.

“It took me about 12 days to write the screenplay. While making Qubool, I found myself continuously striving to achieve the film noir look. I was creating a time that is not only about the set or the costume or the make-up, but about how people react and behave. People change with time. So, if I am showing a person from the 1970s, he would behave differently than a person in 2022. These are small things that I kept in mind,” said Ankit Singha, a first-year Film Making student of iLead, who directed Qubool, which won in the Best Student Film and Best Director categories.

Adhura Aans was a trailer and teaser competition. Naamkaran required the participants to write down the names of a web series starting with a given alphabet within a minute. Cine Quiz, which was also based on web series, saw Suvrodeep Debnath, a second-year Electronics and Communication Engineering student of FIEM, win.

Let’s Fight was an Oxford-style debate whose motion was ‘This house believes that as technology has advanced, the art value of cinema has diminished’. For Ek Thi Nautanki, an acting competition, participants enacted situations given to them. Soumita Bhattacharya, a first-year Computer Science Engineering student of FIEM, bagged the first position.

Yaadon Ki Baraat was a memory game where web series names were shown to the participants for 30 seconds. They were given another 30 seconds to jot them down in the correct order. Writtika Mitra, a first-year Computer Science Engineering student of FIEM, was the winner.

Participants were given an on-spot topic and 45 minutes to write an essay within 300 words at Likhavat. Soumita Bhattacharya, a first-year Computer Science Engineering student of FIEM, was the winner. Ek Duje Ke Liye was a couple-friendly event where the duo had to answer questions about each other. Bihan Banerjee and Srijoni Dutta, both first-year Electronics and Communication Engineering students of FIEM, were the winners. In Roop Badal, participants had to dress up inspired by a television character. Homagni Bhattacharya, a first-year Electronics and Communication Engineering student of FIEM, emerged as the winner.