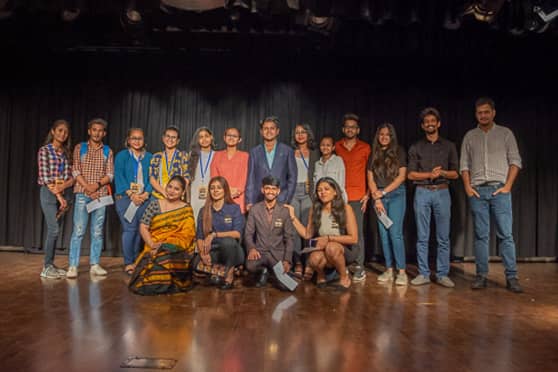 The Bhawanipur Education Society College (BESC) hosted the 7th edition of The Bhawanipur Theatre Festival from March 30 to April 1. The theme for the three-day festival was ‘Facade: All Your Faces Are You’.

The Bhawanipur Education Society College emerged as the overall winner; the second position was shared by Scottish Church College and Shri Shikshayatan College and Women’s Christian College was placed third.

Goonj: Scottish Church College was the winner of the audio-drama competition, with Maulana Azad College bagging the second position and Aarohan, one of BESC’s teams, coming third.

“Our audio play was called The Last Train. It revolved around the reactions of passengers in a compartment of Dibrugarh-Kanyakumari Express after the national lockdown was imposed on March 24, 2020. It is a slice of reality that we tried to show to the best of our abilities. Alongside the emotions and reactions, we also tried to bring alive the atmosphere of a railway station, Salem station in this case,” said Sukanya Chaudhury, a third-year English student of Scottish Church College.

Tamasha: The winner of the street play competition was team Aarohan of BESC, the first runner-up was team Rangpeeth of NSHM Knowledge Campus Kolkata, and the second runner-up position was shared by Shri Shikshayatan College and team Antarjal of BESC.

“After a very long time, we have seen an offline competition of this scale. What made today’s experience better was the stiff competition. Our play titled, Aisa Kaisa Paisa? was an attempt to educate and free Indian society of financial illiteracy and help people take a step towards monetary enlightenment,” said Prerna Mukherjee, a third-year Economics student and member of Aarohan.

Shrayon Chanda of the Jadavpur University Drama Club was declared the Best Performer. “I was part of a play called Oporichito, a satire loosely adapted from Rabindranath Tagore’s play Phalguni. At the end of the day, it is about a collective effort,” said the first-year master’s in History student of Jadavpur University.

Mukhauta: The mono act competition saw Deepti Pancharia of BESC as the winner; Rajdeep Dutta of Scottish Church College was the first runner-up and Sahil Lakhmani of BESC was declared the second runner-up.

“I played a fictional character named Rani Karnavati, who was forced to marry a ruler named Hamran Mirza Zafar after her husband lost the battle to him. I decided to write a monologue on a line that crossed my mind, Haram ki chaar deewaro mein dabb rahi ek aawaz hai (There is a voice muffled by the four walls of prohibition),” said Deepti, a second-year Journalism and Mass Communication student of BESC.

Hera Pheri: The comedy-drama competition aimed at finding dramatic elements in a predominantly comic presentation with an ending that need not necessarily be happy. BESC’s Spot team, BESC’s Main team and Shri Shikshayatan College bagged the first, second and third positions, respectively. “The play revolved around an amateur couple that came to see the play but eventually came to know that even they are part of the play. The minor twists in the plot set it apart from a regular slapstick comedy,” said Akancha Pipalwa, a second-year Journalism and Mass Communication student of BESC, who is a part of the BESC’s Spot team.

Yes, And…: The competition saw participants perform monologues. Sahil Lakhmani of BESC was the winner. Monosij Banerjee of Jadavpur University was placed second and Huzaifa Bin Misbah of BESC came third. “I just wanted to put forward a performance to the best of my ability. The audience's applause was my best reward. The award was just the icing on the cake,” said Sahil, a third-year BCom student.

Frame of Mind: The boardroom drama competition made performers use physical spaces to suit their narrative. From staircases to hallways, each team was given a separate location to perform in, and the venues were allotted using a lottery system. BESC’s Main team was declared the winner. BESC’s Spot team was the first runner-up, while Scottish Church College was the second runner-up.

“We had 15 minutes to come up with a catchy tag line and four funny and innovative ways in which we could use a hand fan. While preparing the skit, our main objective was to have fun. I'm glad that the judges and the audience could connect to our performance. That's what helped us win,” said Bikramjit Das, a third-year BCom student from BESC’s winning team.

Curtain Call: The stage play competition saw the host college win with their play on the theme Slice of Life. It highlighted various social and political issues such as untouchability, unemployment, conservative thinking and gender inequality. “I'm glad that we were successful in conveying our thoughts and feelings to the audience through theatre. I will be really looking forward to such experiences further in life and gaining such rewards too,” said Pratyush Prakhar, a third-year BCom student who shared the Best Director award with Prerna Mukherjee.