8 books to celebrate the Christmas spirit 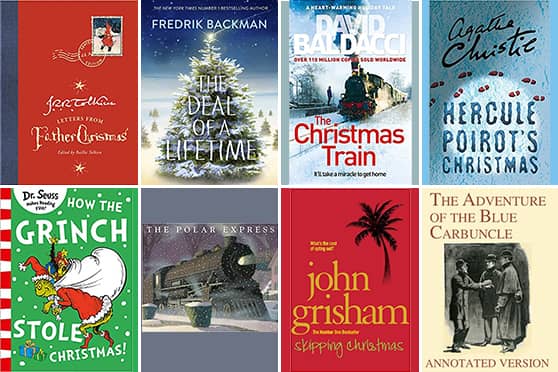 Advertisement
Summary
From illustrated novels by Dr. Seuss to murder mysteries by Agatha Christie, choose from an array of Christmas reads this season.
Humour, kindness, joy of giving, retrospection and happiness form the essence of all Christmas tales

Already read and re-read the Christmas classics too many times? Looking for new books? Here are 8 books that celebrate the spirit of Christmas. Cosy up with your pick and enjoy.

If you received a letter from Father Christmas, how would it read? Would it talk about the comical (mis)adventures of the reindeer and polar bears or the naughtiness of the goblins? Would it bear tidings of how Father Christmas packs gifts for the children? Letters from Father Christmas is a documentary-style book that talks about all the letters that Tolkien’s children had received from Father Christmas. Celebrating its centenary in 2020, the book has been printed in a hard-back edition with illustrations and a new foreword, which certainly cannot be missed.

How the Grinch Stole Christmas by Dr. Seuss

The Grinch isn’t particularly fond of Christmas. In this colourfully illustrated tale, the Grinch tries to steal Christmas from the citizens of Who-ville. Will the people succeed in saving the spirit of Christmas and enjoy the season? Dr. Seuss’s rhymes, dystopian illustrations and out-of-the-box storylines have been a constant read during the Christmas season.

The Adventure of Blue Carbuncle by Arthur Conan Doyle

There is a Sherlock Holmes mystery for every season and every reason! While the city of London decks out in the colours of Christmas, a precious gemstone is stolen from the hotel room of the Countess of Morcar. Will Sherlock be able to unmask the real thief and the motive? The Blue Carbuncle is one of the 56 short stories based on the adventures of Sherlock Holmes and blends well with the festive season and its essence.

How do you celebrate Christmas? Family dinner or a reunion with friends. When a young boy lies alone on his bed on Christmas, he hears the sound of an approaching train. The curious little lad goes out to investigate and finds the conductor calling him towards the train bound for the North Pole. Not wanting to miss a chance of a lifetime, he hops onto the train and to a world of unknown adventures. The Polar Express has also been adapted to a critically acclaimed movie by the same name.

Poirot is a magnet for mystery and murder. While he tries to enjoy a relaxing holiday with his friend, he is yet again pulled into a murder mystery. Following tradition, the Lee family met for a family reunion on Christmas eve only to witness the murder of the patriarch. Poirot’s investigation gets tough when he realises that the patriarch’s ways might have earned him too many enemies. This murder mystery during the holiday season is a not-to-miss read.

The Deal of a Lifetime by Fredrik Backman

Backman brings back the magic of his writing during the Christmas season. When a father and a son meet after years on Christmas eve, it becomes a retrospective meeting of each other’s roles as a parent and a son. Filled with contemplation and humour, The Deal of a Lifetime makes the readers realise the importance of the gift called life and how its worth increases when shared positively with those around in happiness and sorrow.

The Christmas Train by David Baldacci

Journalist Tom Langdon is forced to take a cross-country train instead of a flight to reach home in time for Christmas. But he has no idea that this journey would be that of a lifetime where he meets wise, obnoxious, mischievous and hilarious characters which takes him on a parallel retrospective journey of life. This holiday season, stop for a while and ponder about the people we meet and how their presence makes a difference in our lives.

The Kranks have made it a point to skip the festival altogether and set sail on the Caribbean for a change. While their out-of-the-box fantasy progresses well, will they be successful in spending a ‘happy’ holiday without celebrating Christmas, or does skipping the festival come with a price tag? This innovative novel by Grisham talks about a life without Christmas and its pros and cons.