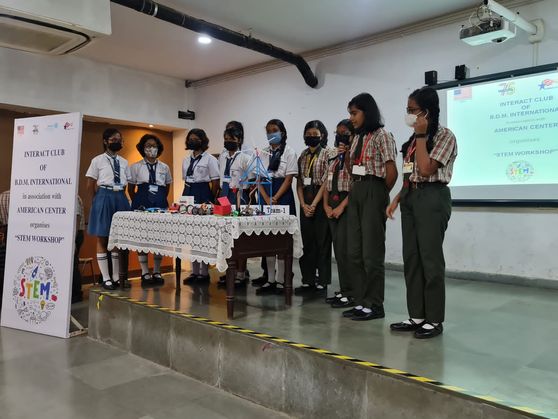 B.D.M.I. organised a STEM workshop on July 7th, 2022 on the topic “Nurturing Young Women in STEM”. The event was held in collaboration with the Interact Club of B.D.M.I. in association with the American Centre. The major attempt of the event was to level down the ever increasing gender gap and thereafter promote the inclusion of women in the field of Science and Technology. The workshop was further encouraging young girls to come forward professionally as well as academically in avenues of Science, Technology, Engineering and Mathematics or ‘STEM’ as it is known globally.

The respected Vice-Principal of the institute, Ms. Madhumita Seal had grabbed everyone’s attention with her opening speech which focused upon a famous adage by the French feminist Simone de Beauvoir. The VP further expressed her gratitude towards the supportive management of BDMI. The esteemed Principal of the school further urged the young girls of the city to break the stereotype and thereafter make their contribution in the male dominated field. Young girls from classes IX to XI from various reputed CBSE schools also formed groups with their counterparts in the BDMI so as to design, craft and create prototypes on the principles of STEM.

Working as inter school teams the students were asked to create such working models that utilised futuristic technologies like Hyperduino, Electronic Snap Circuits, Little Bits, Spherobot, Cubelets+Knex etc. The distinct part of the workshop was to develop an SDG sensitive model bearing its relevance in mind.

Each group thereby had one and a half hour time where they had to brainstorm the ideas and develop the models accordingly. The fundamental equipment and gadgets were provided by the school to guide the teams alongside. The young girls developed novel ideas and sustainable prototypes like Battery Operated cars to save energy and so on.

All these environmental friendly models were developed in a way to provide maximum value to the society and reduce carbon footprint. The workshop ended with students presenting their innovative models as teams and receiving a token of appreciation in the form of certificates by the American Centre.