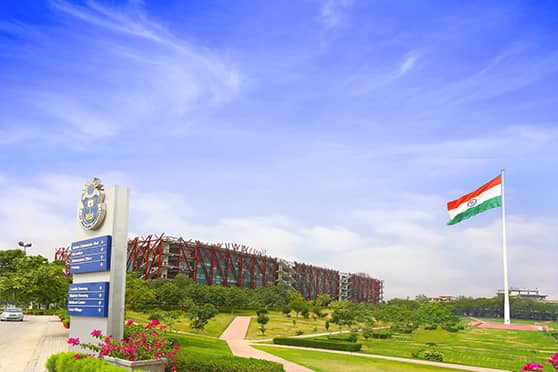 This MoU makes JGU the only private university in India to partner with the Spanish government. Source: Facebook

Advertisement
Summary
Under the MoU, the Jindal School of Languages and Literature will host a native Spanish language lecturer
Admissions to BA (Hons) Spanish programme at the institute are currently open

Sonipat-based OP Jindal Global University (JGU) has signed a memorandum of understanding (MoU) with the government of Spain to offer Spanish language courses taught by native Spanish lecturers who will also impart lessons on Spanish culture and literature to the students.

Under the auspices of the Spanish Agency for International Development Cooperation (AECID) and the Spanish Ministry of External Affairs (MAEC),

The MoU has multifaceted benefits, especially for the Jindal School of Languages and Literature (JSLL), JGU said in a statement. JSLL will have a long-term academic engagement with a native Spanish language lecturer who will teach Spanish language, culture and literature. The educator, with specialised training in teaching Spanish as a foreign language, will offer students a holistic understanding of Hispanidad (Hispanicity).

JGU is offering a Bachelor in Arts (Honours) programme in Spanish. Admission to the 2022-25 batch is ongoing. The admitted students will work with the native Spanish language teacher and JSLL faculty to hone their pronunciation and better their communication skills and socio-pragmatic competencies in Spanish.

The thee-year programme will develop linguistic competency and immerse them in literature, cinema, music and other arts of Spain, Latin America and the wider Hispanosphere. Students will be encouraged to engage in several internships with organisations where they will be exposed to Spanish-speaking clients.

C Raj Kumar, founding vice-chancellor of JGU, said, “The MOU demonstrates the commitment of JGU and JSLL to advancing the study of Hispanic literatures and cultures in India. JSLL is proud to join the burgeoning field of Hispanic studies in India. The number of Spanish speakers in the world today exceeds 500 million. Students in JSLL will be able to make the most of the wide-ranging teaching expertise of Indian and foreign faculty members possessing the highest level of language training and proficiency.”

The step towards encouraging Hispanic studies at JGU, along with the MoU, includes 22 agreements with higher education institutions in Spanish-speaking countries. JGU will be associating with the University of Granada, University of Salamanca, University of Chile and the National University of Colombia. The students at JSLL will have special workshops at the JGU campus, extracurricular activities and study abroad opportunities through these associations.

“It is a matter of great pride for JGU to have this formal arrangement with the Spanish Embassy in New Delhi under the MAEC-AECID Spanish Assistantships at Foreign Universities programme. I am sure learning Spanish from a native Spanish Language Specialist will expand the learning horizons of our students and help them in their careers and further education pursuits,” Mohan Kumar, dean of International Affairs and Global Initiatives, JGU, said.

Denys Leighton, dean, JSLL, said, “We are thankful to the Spanish government and are excited about having a native speaker of Spanish trained in teaching Spanish as a foreign language. JGU is currently the only Indian private higher education institution to be part of this programme of Spain's Agency for International Development Cooperation and one of about ten participating institutions in India and Sri Lanka. Students of the BA (Hons) Spanish programme will receive excellent instruction by Indian and international Hispanists at JGU and will benefit from a rich learning environment. We will also work to ensure that students of the programme have a meaningful study abroad experience in a Spanish-speaking country as part of their course of study at JGU. This will be an added value for our students."

Dharmendra Pradhan encourages participation from citizens in the National Curriculum . . .