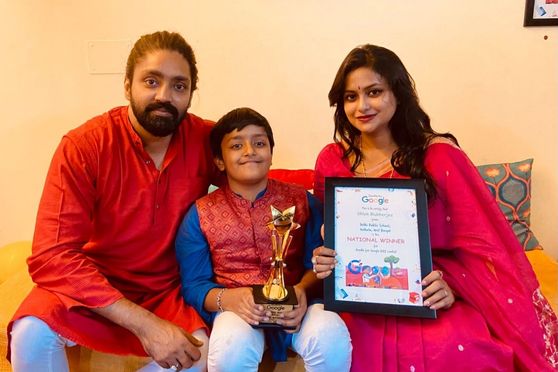 Advertisement
Summary
Google recently organised a competition, ‘Doodle for Google’ where 1,15,000 students from Classes I to X from across 100 Indian cities participated
Shlok's artwork was titled ‘India on the centre stage', which depicted a painting of a human being hand in hand with a robot, along with pictures of the environment and the earth in the background

How often do you log on to the google homepage and see the doodle? Must be quite often, but have you ever wondered who makes these and how does one get to put their artwork on the homepage?

Google recently organised a competition, ‘Doodle for Google’ where 1,15,000 students from Classes I to X from across 100 Indian cities participated. Out of all these participants, it was 10-year-old Shlok Mukherjee, a student of DPS Newton, Kolkata who bagged the first prize. His artwork was titled ‘India on the centre stage’, which depicted a painting of a human being hand in hand with a robot, along with pictures of the environment and the earth in the background.

We, at Edugraph, spoke to Shlok, the winner of the ‘Doodle for Google 2022’ competition, along with his parents and mentors, about his source of inspiration and his future dreams. Read on to get inspired!

When asked about the inspiration behind the doodle, Shlok said, “The topic for the entry was India after 25 years, so I thought, what could be better for India and what did India have that could be made better, so that was my inspiration. The previous Google doodle guy I saw while opening the website, so that also gave me a little inspiration.”

“I got the idea of participation from my uncle and this was the first time I applied for this competition”, added Shlok. 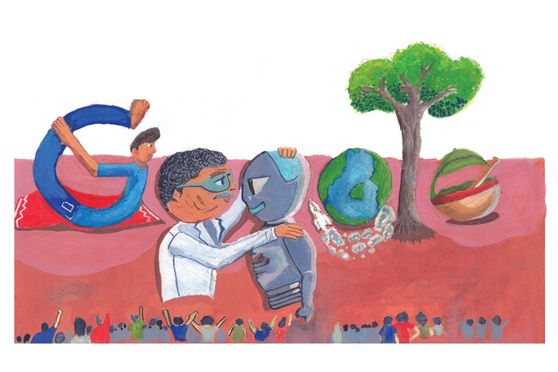 The doodle made by Shlok for Google Source: Google

A variety of interests

“When I was 3 years old I started drawing art on paper. I like making sketches and paintings of gods, goddesses, mythological creatures, and horror subjects. I like colouring and sketching directly, and I like shading with markers and crayons. “Apart from that, I like to play the guitar, I sometimes go swimming and play cricket when I get time. I want to make India a better place in the future and I want to become a scientist, artist and guitarist. My drawing explains how I imagine my country would look like in the future. Ayurveda has immense potential and it has a lot of things to do with nature. So, I want to let nature grow more,” he added.

Shlok’s mother Paramita Chatterjee stated that he got inspired by his uncle who is an artist and got to know about the competition from him.

“The environment of our house has impacted him, like I am deeply into Yoga, Ayurveda, Astrology, meditation and spirituality. His father is also inclined towards art. He is a fashion and art photographer. So, I feel all this together has inspired him and Shlok also has an interest in science. Environmental motivation has played a huge role in Shlok’s thinking and led to him drawing that doodle. His imagination, when it comes to art, is very varied, totally dependent on his mood. He also is an excellent guitarist. Academically he is an average student but is self-sufficient when it comes to everyday activities. He is not a mumma’s boy at all.” 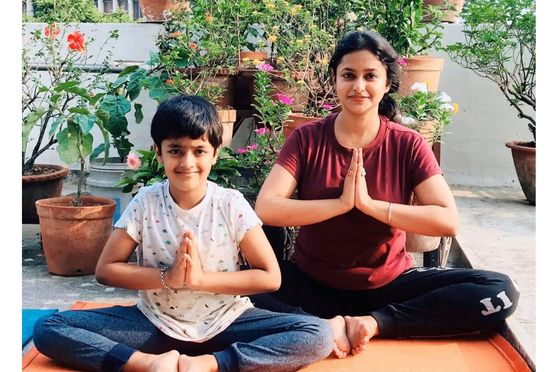 What his mentors have to say

Sayan Mukherjee, Shlok's uncle and art teacher said, “I had done a Google doodle on 15th August 2021, for which Google has commissioned me. So, this year they approached me to make a reel out of it for the ‘Doodle for Google' contest so that kids know about the contest. I was also unaware of the contest. So when I was making the reel I suggested to Shlok that he should participate in the contest, since he had 10 days to the deadline, which was 30 September.”

“I asked him to make a list for what is good for India in the coming years and gave him a printout of the Google letterhead so that he knows what to create with these words. He did a couple of sketches on an A4 sheet and he came up with the idea of making the letter G in the yoga pose and O like a robot. That's how he went ahead with it." 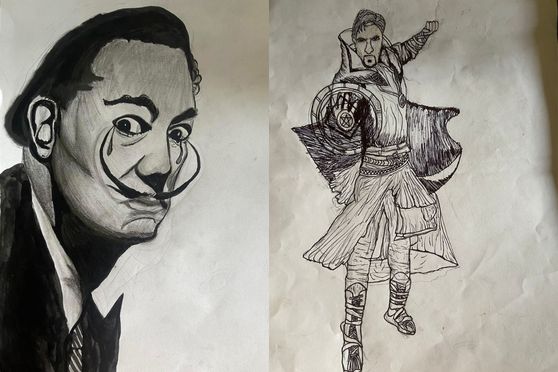 Sketches made by Shlok

“It is a great satisfaction to know that he won. He often comes and sits with me when I work on my art. I could say that his inspiration comes from the family itself, where art is being conducted. Plus, the environment of the house too plays a major role in inspiring a child.”

Ms Sonali Sen, the principal of DPS Newtown, also expressed her gratitude and said, “Congratulations to our dear Shlok for winning the Google Doodle competition. Admire and appreciate his creativity, his ability to think deeply about the future of our nation and the environment. We are very proud of him and so happy for the laurels he has brought to his parents and the school. Wishing him more success and hope he will explore and use his talents effectively in the years to come.”