Life of a Law Student by Sampurna Mukherjee, a student of Symbiosis Law School 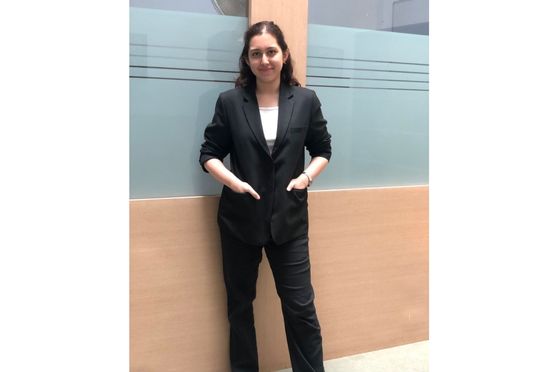 Advertisement
Summary
Law is present in every sphere of our lives, and it is beneficial to study and be aware of it at all times to defend yourself against anybody who threatens it
One of the first things taught & trained to a law student is to "unlearn, learn and relearn"

It is true to say that a career in law is well-liked, well-paid, and challenging. Excellent leaders, imaginative thinkers and people who are enthusiastic about a range of social concerns are also produced by the legal profession.

We, at Edugraph, talked to an undergraduate law student to share her experience in law school, how she prepared for the law entrance exam and much more.

1. Did you always know you wanted to study law? Why did you choose law?

Simply put, Law chose me and not vice-versa and in many ways, it was meant to be. I decided to take up legal studies in my plus two at Mahadevi Birla World Academy [MBWA], Kolkata because of my father’s desire and also fate set matters into motion. After clearing my Class XII Examination the question of choosing between English and Law came to the fore. After scoring only a 90/100 in English in comparison to a much surprising score of 97/100 in legal studies, it was decided that the latter with its wide avenues and tremendous opportunities was the place and career to be in, for me, and today I am very thankful for the decision that I took almost 5 years back.

Not only do I get to explore the highly technical and logical field and the world of law - but the very fact that I can unwind after a long day of work with a few pages of reading of different genres that keep changing from time to time is more than what I had imagined and hoped for my life to be.

Also read Career in Law: What to study, where to study and job opportunities in the future

2. How did you prepare for CLAT? What was the difficulty level?

I sat for CLAT for the first time in May 2017 - a mere two weeks after my Class XII board exams, just for the initial feel of the experience. I had only preliminarily read up on different sections of the paper, such as Legal Reasoning, English and GK. I scored a 60+ on a paper of 200 marks in total, which to my mind felt decent, considering there was no coaching involved.

It was decided then, after taking everything into account, that I would utilise 2017 as a gap year and prepare to take CLAT 2.0 in 2018 and enrol in a coaching centre since my 60+ score was not good enough to get me into any top-ranking NLUs. It is also crucial to point out that I had not sat for any other legal entrance exams up till this point, which is not something that I would not recommend to any legal aspirants out there. I simultaneously took admission to a BA English course as a safety net so as not to waste one year entirely if I were unable to crack CLAT or the other law entrance exams.

It was an extremely rigorous but rewarding experience and I learned a lot. However, I decided to drop out of my BA programme to devote my time fully to my legal prep. I practised hundreds and thousands of mock papers that were supplied by the coaching institute and got all my doubts resolved which proved to be a game-changer for me. In a nutshell, it was a long journey of continuous effort, improvement, self-awareness, reflection and progress.

CLAT did feel difficult on a personal and professional level, but if I could go back in time and repeat it all, I would. For the discipline, the inherent sense of self-worth and the knowledge that I had gathered from the experience of it. For someone who is looking to crack the CLAT exams, the terrain of difficulty can be navigated on an individual basis with an analysis of the strengths and weaknesses of the person involved. Thereafter, the student needs to work on them over a length of time so that it does not seem "difficult" by the end of it. Ultimately, this is what worked for me.

3. What made you choose Symbiosis over any other college for law?

I scored 110+ in my second attempt i.e. in CLAT 2018, which gave me a rank of close to 1000 among 60,000+ candidates. Along with everything else, initially, that got me into NLU Assam. To increase my options I also sat for Symbiosis's SET examination, though only for the Pune branch. When I qualified for the Personal Interview - Writing Test [PI-WAT] round after scoring the cut-off mark, it was a no-brainer to opt for Symbiosis over any NLUs that were being offered to me.

Symbiosis Law School, Pune at the time was over 40 years old with a good Alumni base working in different sectors, a recurrent institution in the NIRF list published by the Government of India every year and a great city to live in.

4. How was your 1st year at the college?

My first year in college was memorable, to say the least. I made friends from all over the country. It was a cultural shock as well as a delight. I studied hard and lived a fast-paced life, but with intention, purpose and excitement at the same time - even for the most mundane activities that one could think of. I loved and still love going to college and spending time at the reading hall and Gyan gallery, having fun at the canteen and exploring the vibrant and beautiful city of Pune in my spare time.

5. Did anything surprise you when you became a law student?

It is a myth that if you are good in English or Public speaking, you would automatically be a good lawyer. Nothing could be further from the truth. While it came as a surprise, this was one of the first things that we were taught. We were trained to "unlearn, learn and relearn". Having these skills in your repertoire does help, but they can be built over time.

6. What is it like inside a law class? How is a law school different from any other?

A law class, as opposed to a non-law class, is not very different per se i.e. because the provisions form an extended part of a normal textbook, like those found in any classroom. The difference lies in the case laws, which are like case studies and more practical in nature.

The teaching style, however, differs from class to class. For instance, from personal experience, I can say that my torts class was about discussion-debate-theory-practice while my International Affairs - Political Science course was all about practical insights synthesised with regular learning, which could be done without any textbook's intervention.

Law School is more professional I must say because it tries to develop your character and outlook over the course duration. I do not see that kind of professional and profession-oriented emphasis in regular BA courses, except in other allied courses, such as Medicine.

7. What area of law interests you the most?

Dispute Resolution or Disputes interests me the most, followed by Constitutional Law, International Treaty Law, Trademark Law and Jurisprudence.

My favourite part about studying law is how relevant it is - to you, me and every other person who is alive and breathing. Law is a code that is followed and imposed by the State and its organs to maintain order and ensure a civilised state of being. Whether it is following the traffic signal, or approaching the Court to resolve disputes - law is present in every sphere of our lives, and it is beneficial to study and be aware of it at all times to defend yourself against anybody who threatens it.

9. How was your first moot court experience? How do you think moot court helps law students prepare for their future?

My mooting journey has been a limited one, with my first and last moot being the one I did in January 2020. It was the Surana and Surana IPR Moot Court Competition in association with IIT Madras and Anand and Anand, where I was the speaker in our team of three. After a close fight with a team from Christ University, Bangalore, we were declared as the first runners-up in the competition.

It was a tremendous learning experience and my first up-close tryst with the law outside books, college, marks and professors. I learnt how to read, write and argue effectively and for that, I am forever grateful to my brilliant teammates. It was a gratifying experience in a beautiful campus with some of the best counsels and legal stalwarts present - with the finals being judged by retired High Court judges. Quite an experience for us second year students!

While moot courts are good for prep, they are not a complete representation of the real world that is out there - with court delays, pendency and lack of time that plague every lawyer, litigant and judge alike. Hence, even though I would recommend moot court for my juniors and to-be-juniors out there - if someone is not good or interested in it, that is completely fine and acceptable. Instead, do something that works for you - whether it is extra and co-curricular debating, writing or ADR competitions that are becoming increasingly commonplace now. There is no perfect way to do law school but that should not deter someone from participating at all - because these experiences culminate in how you turn out in the long run.

10. What’s next for you after your law degree?

This is a hard question to answer at this point because we are such dynamic individuals who keep changing from time to time and right now I am torn between litigation and a law firm job, which I hope to gain clarity on, soon. In the meantime, I am sitting for interviews for the position of legal associate and then allowing destiny to take its course like it always has.

In the long term, I would like to do a masters in an international university to hone my knowledge and skills in the legal field further and travel globally as much as I can. But for now, we will see how it goes and take each hour of each day at a time.