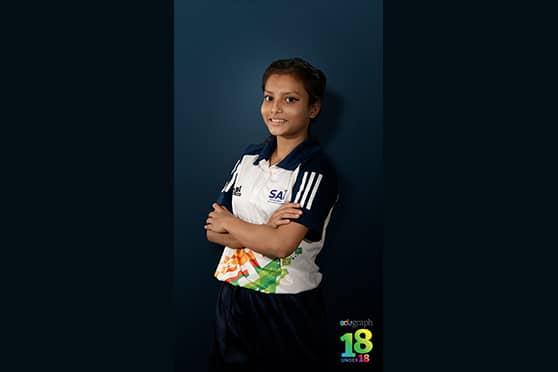 Advertisement
Summary
She finished second in the 72nd Senior State Gymnastics Championship and won a gold and a silver in 8th Netaji Subhas State Championship in May 2022
She trains at the Sports Authority of India hostel in Salt Lake, Kolkata, and is preparing for the Khelo India Youth Games

Anushka Jana may seem shy but she was, by her own admission, a naughty child. Her footballer father introduced her to gymnastics to channel her energy.

At 16, the Class X student of Uttarpara Girls’ High School has several awards to her credit, including gold in the floor exercise category and in the team event at the 56th Junior National Artistic Gymnastics Championship 2021 organised by Gymnastics Association of J&K, in collaboration with J&K Sports Council, under the aegis of Gymnastics Federation of India (GFI) and J&K Olympic Association.

Anushka, one of the winners of the Edugraph 18 Under 18 Awards, was three-and-a-half years old when she started learning gymnastics. “I was very restless and naughty as a child. So, my parents thought of putting me into gymnastics. I joined Sadathi Club in Uttarpara to learn gymnastics,” she said. With time, gymnastics became a part of Anushka’s life.

Anushka finished second in the 72nd Senior State Gymnastics Championship held at Uttarpara Gymnasium on May 1, 2022.

Anushka also participated in the 8th Netaji Subhas State Championship held on May 14-15, 2022, where she came first in the all-round category and second in floor exercise, beam balance and table vaulting.

Anushka mostly practises in the morning at her Sports Authority of India (SAI) hostel in Salt Lake, Kolkata. She tries to maintain a protein-rich diet and makes sure she warms up properly before her exercises. “It is very important to warm up before we start. You can avoid accidents and sprains with proper warm-up exercises,” said Anushka.

Anushka’s father is her first inspiration. “My father used to play football. He played for Bali Pratibha Club First Division League in Kolkata in 1991,” she said.

The mention of Olympics brings a glimmer to Anushka’s eyes. “Olympics is my ultimate goal and I am preparing every day for it. My parents believe in me and think I can make a name for myself as a gymnast,” said Anushka, who is busy preparing for the Khelo India Youth Games.

Anushka’s favourite subject is History and she plans to study in the arts stream in Plus II. When she is not studying or doing gymnastics, Anushka enjoys drawing with her pastels. “I like to draw when I am free. I like drawing with pastels and I mostly draw sceneries. I have never been trained in art but I do it because I have interest.”

Anushka missed the Edugraph 18 Under 18 Awards ceremony at GD Birla Sabhaghar as she away taking part in the selection for the Indian gymnastics team for the Artistic Gymnastics World Championship. “Winning the 18 Under 18 Award was a very happy moment for me. I didn’t expect to win but all my family members and teachers were hopeful. It is a motivation for me to do better,” she said.

Uttarpara Girls’ High School headmistress Binata Kundu was there at the awards ceremony to receive the trophy on behalf of Anushka. “It is a proud moment for the school. We have full faith in Anushka and we know she will have many such achievements in life. My blessings are always with her,” Kundu said.