IIT Roorkee hosts a conclave on Blockchain and Cryptocurrency 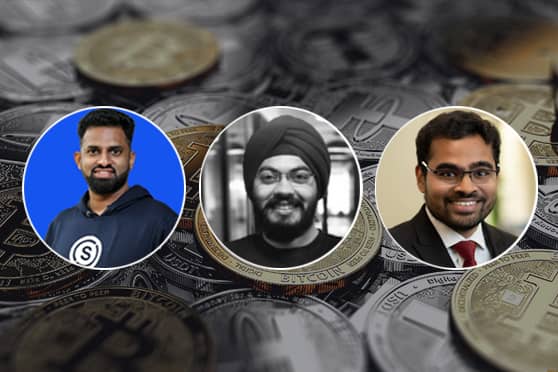 Cryptocurrency and Blockchains were simplified for students at hour-and-a-half-long session on Decentralising Youth on January 23. The session was a part of IIT Roorkee’s three-day E-Summit which began on January 21, 2022.

Excerpts from the session…

The concept of Blockchain

Melbin Thomas: Imagine that you are doing a transaction with someone across the room or across the world. What happens is that money gets deducted from your account and that gets hit on a server on the backend and that server again hits another server of your recipient’s bank account and the money gets added. What Blockchain does is that instead of the divided entries in each of these banks, you have a single copy of your transaction ledger all over the world and all of these computers talk to each other. Mining is an incentive mechanism in which all these computers across the world stay connected to the network and validate these transactions. You do not need any centralised or trusted parties in between to make this transaction happen.

Akshar Madhavaram: For a single payment at a store, the transaction process ends when the financial year ends. There are so many resources and institutions behind ensuring trust in general. But currently, this entire technology called Blockchain creates a trustless system because the probability, the algorithm are so apt that you don’t have to worry about that anymore. Before crypto started, only 5% of US citizens could invest in equity in companies or start-ups. The new idea, which is going to be a billion-dollar or a trillion-dollar potential company, only the top 5% of the richest countries in the world could invest in, is a super privilege. But now already 23% commoners within two years, almost five times the number of people who can now invest using cryptocurrency.

Amanjot Malhotra: If you look at the whole financial ecosystem, then people are looking at and exploring ways to grow their assets because the burn rates, in general, have gone up. The kind of money that we are spending for a basic living has gone up, which is now closing the gap between the western world and the Indian metropolitans. Our parents used to believe in fixed deposits and post office schemes, which were their go-to things but now they aren’t getting much from there. Even the savings bank has reduced the interest rate, which is not matching with the inflation scales. Prices are going up and people all over the world are finding avenues to grow their money.

Akshar: I was looking for something that can be more competent and meaningful and then I came across Web3. The entire notion of owning your platform, owning your community, creating a community where you are doing something because the community wants it. The incentives are structured in such a way that people who are contributing to that use just a piece of an algorithm to validate and reward them and at the same time use their talent to move forward. This is global.

Amanjot: I came across Cryptocurrency around 2016-17 when only one company was into aggregating the changes and I was very curious to know about it. The reason why I joined this industry is that I could realise that this is the future. It gives a lot of power to the creator, community, and reduces middlemen. Web3 is providing governments to the community and it is monetising the community’s data, time and effort.

Melbin: In the rural areas of Bihar, there aren’t any proper banks because it is not profitable for a bank to set up a branch there. This is one of the major problems. Farmers do not have access to capital, no banks to take loans from. This was around the same time that I was introduced to crypto and I thought this can change the whole game. With Delphi (programming language) and everything coming in, the unbanked can essentially get bank accounts. You don’t need physical infrastructure anymore. That’s what opened my eyes.

Amanjot: Recently in Turkey, the government has taken some steps to stamp down on their authority and exchanges but according to me everyone who understands Crypto knows there’s always a way around it. The genie is out of the bottle now, people have tasted Crypto and they will go to MetaMask and anything like that. Recently, I spoke to someone belonging to India who’s using Coinbase using VPN. Keeping China aside, every country is trying to regulate. If a country wishes to block all activities related to Crypto, there will be a sort of revolt because people are suffering as their income isn’t increasing and the prices are escalating. There will always be one part of the population investing in Crypto one way or the other.

Akshar: When I was doing a whitepaper along with a few people on Crypto regulations across the globe they could be divided into three tears. Countries like Singapore have very sophisticated science behind data regulation. The second tier of countries is putting caps, doing security checks and ensuring that it is recognised so that people can at least benefit from that. Then there are black boxes like India. It’s like activism that is happening across the globe because governments, for example, India, have outsourced every technical thing and they just hire a consultant who can do that. But currently, CRAT Crypto regulations create some tax structure around Crypto to make benefits of this technology. You need to be way ahead of this curve and build new protocols which can track other protocols.

Banks opposing the use of digital currency

Akshar: If everyone starts using digital currencies and blockchains, a lot of bank activities may become null and void. For example, there wouldn’t be any need for a person as an accountant or bank manager or fill up forms to transfer money. Also, to transfer a huge amount a lot of processes are involved but in Cryptocurrency, you don’t need anything other than a hash ID. The money goes instantaneously.

Amanjot: Say that you are a global company, a 100% remote company and have employees in different countries. You are not going to set up a bank account to pay their salaries every month. Either you are going to use west union money transfers which is going to take 5% out of it, which is a huge chunk and the person has to also pay taxes over that. Or you'll have to use something like PayPal if that country allows it and there would be quite a delay in the process. And if you just share your USDT address, you receive your salary within a minute.

Opportunities of students in the crypto ecosystem

Akshar: There are plenty of opportunities for students. If you can properly say the definition of Blockchain, you’ll have companies who can hire you as content creators. You can be an artist creating land for these metaverses that are coming up. If you are a designer, you can design good marketing campaigns for this community. If you are a video editor or just have a passion for that you can educate people. You can make an entire living out of Crypto these days especially because it’s in a nascent state.

Amanjot: If you’re a content creator of any format, you can start a YouTube channel or a blog, a snackable content, which is easily consumable by anyone. It’s all tech so developers need to learn programming languages like Rust, Solidity, and Javascript. Graphic designers, user interface designers, user experience designers — all these profiles are required and the marketing and community management on these profiles are very important in the Web3 base because that’s where the project gets the energy and momentum to rocket itself.

Melbin: Anyone who’s looking at the finance sector you’ll see that during campusing companies are hiring investment analysts. There is a huge new sector for Crypto analysts coming up. Investing in Crypto is a science on its own. New sectors are coming up in this field like how to make investment decisions in Crypto, how to manage asset, and how to deal with the financial aspect of things. Even if you know how to make a simple desk transaction, you’re an expert. Anyone who can do an on-chain transaction now is an expert as it is a booming sector.

How should students learn to invest in Crypto?

Amanjot: Invest, lose your money and in regret learn how to invest money in crypto. That’s how I learned it in my life. A long and safe route is to start working with a company that probably has its incentivisation mechanism. Earnout of it and then you’ll understand how token economics works. Once you start to understand, you will know which projects are and could be profitable and turn out to be big.

Akshar: As a student investing in the long term won’t be possible. Working in start-ups you get e-SoCs (System on Chip), which are useful. You can work on new tokens which are launching. Be a part of the founding team or launch your crypto. Maybe you won’t get success at once but you’ll learn a lot about life and business.

UPSC Civil Service 2023 notification to be out tomorrow; Check how to apply here

Bihar Board Class 12 exam 2023 to begin from tomorrow; Check exam day instructions he. . .

NEET SS 2022: Official notification will be out for mop-up round; Know major details