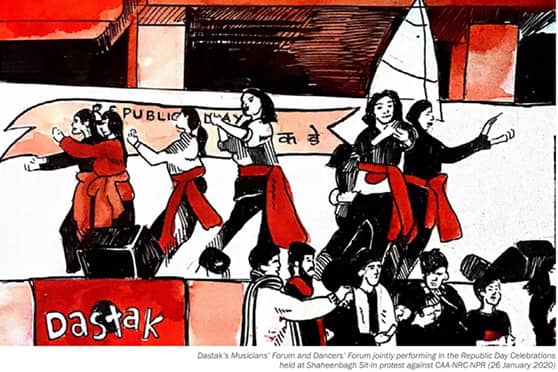 Artivism is the buzzword at Parcha, the digital magazine from Dastak-Delhi University that combines art and activism. The quarterly magazine is solely “for the students, by the students and of the students”. The objective is to reach out to students across all disciplines, colleges and states to produce a strong, unified voice for a better future.

Dastak, a campus-based progressive student artists forum in Delhi University, uses creative and peaceful forms of protests like street plays, and Parcha is their newest initiative.

“Parcha is an attempt to create something like a ‘student struggle’. It is one of the largest student-run magazines in India. Since politics and culture are interconnected, it is essential that we have similar literature and network exclusively for art and culture, where we can politically engage with things we casually call extracurricular,” said Unnimaya C, a 2019 graduate from Lady Shri Ram College, who is the convening committee member of Dastak.

The magazine consists of illustrations, political cartoons and artworks, all researched and curated or originally designed.

The inaugural issue launched in August 2021 has six essays, two poems and a vibrant photo gallery depicting the various times Dastak expressed its thoughts on current affairs through artistic dialogues. To convey the voice of the organisation, the core members mostly wrote on topics like cinema, art, literature and performing arts.

“As a group of students who are also writers, artists and creative people, the way we address this issue is what makes us apart from both idealist critics and elite academicians. We are trying to expose how neoliberalism has penetrated the Indian psyche through a common culture, through monotonous mass production of cinema, literature and music,” says Midhun Puthupattu, a 2021 English graduate from Delhi University.

The Team behind Parcha

Midhun is the convener of Dastak. Arundathi K, a third-year Germanic and Romance Studies student of Delhi University, is the co-convener. Nivedya PT, a 2021 Mass Communication graduate from Indraprastha College for Women, is the convening committee member. The three form the core editorial team of Parcha.

“The experience is very different from my past work. With Parcha, there is a common ideological ground that contributes to bridging the gaps between cultural work and progressive goals. The hope is that the magazine will be able to start these conversations across Indian educational institutions in the future,” said Utkarsh, who has written a piece in the inaugural issue.

“To talk about something we love, other than academics, standing amidst an elite bunch is challenging. Art of resistance, art for social cause or art for mental health are issues I relate to. Parcha offers such a space to reflect,” said Chandana.

The team is working on the second issue, which will focus majorly on neoliberalism and its effects on education and culture. The editorial team also plans to host an open call for students and invite all kinds of content, which would of course be screened and the best ones published.

You can find a digital copy of Parcha here https://drive.google.com/file/d/16eupdh2u_bL54fNdETc1nkWt_IjNUbIr/view?fbclid=IwAR1mOsGUkFHi39LlCYjW3TbhBPwUZXhlMbivjRxRBLousieLtGLhDeT3_co