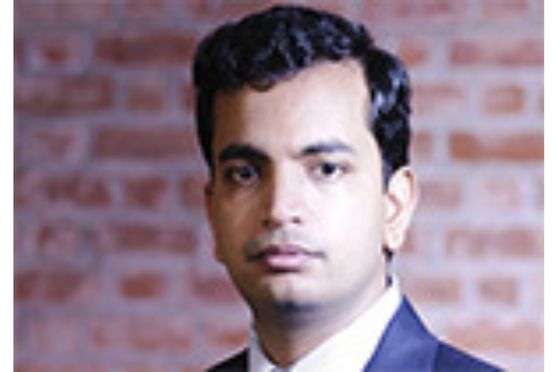 CAT 2022 paper in the evening slot was the same in structure as that in the other two slots. However, the difficulty level overall can be said to be lower than that in both the other slots.

The following was the pattern of examination in the third slot: 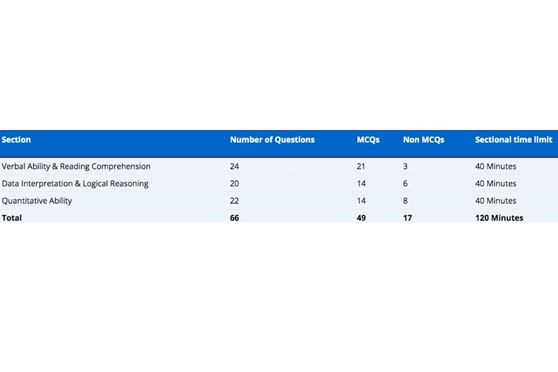 The VARC section of slot 3 had 24 questions, 16 from Reading Comprehension and 8 from Verbal Ability. The break-up was similar to what was observed in the last couple of years. Overall, the section was easy to moderate in terms of difficulty.

There were 4 RC passages, with four questions per passage. The questions were mostly application-based and included inferences, negative-factual (“except”), keywords that summed up the passage, sentences contradicting the author’s argument etc.

The passage on Orientalism and Interpretation of India’s past was the toughest read among the four. It was dense with concepts such as Romanticism, materialism and metaphysics. Many students would have found this passage time-consuming. Some questions based on this passage had confusing options too.

The passage on Human-centred Automation was an easy read, and three out of the four questions were fairly straight-forward. Two of the questions were based on Critical Reasoning.

The passage on Biology and Technology in Complex Systems was of a moderate difficulty level in terms of language and content. The questions were mostly easy to moderate in terms of difficulty. The keywords question in this passage had confusing options, though.

The passage on Social Disorganisation and Crimes was moderate to difficult in terms of readability. The questions were of moderate difficulty. 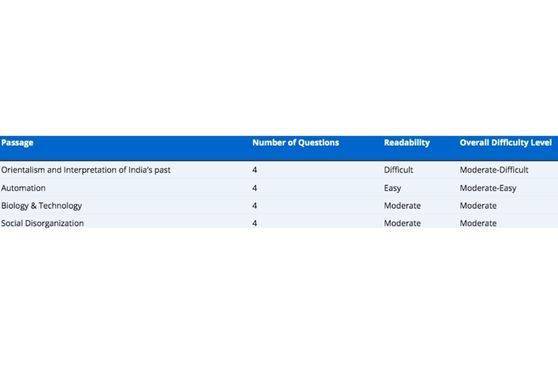 The VA questions were of a mixed level of difficulty.

The Para Formation Questions (3 in number) were all four-sentence questions. The level of difficulty was slightly on the higher side, enabling those with a decent amount of practice to be able to crack them with not too much effort. All these three questions were non-MCQs.

There were three Para-summary questions in this slot. All of these had passages which were moderately difficult and the questions were fairly doable. 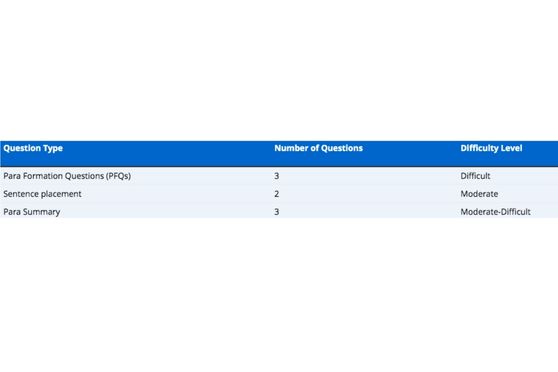 A net score of 22-24 would be a decent score for a test-taker to be able to get 85 percentile (sectional cut-off).

The DILR section, as in the two preceding slots, had four sets with five questions each. The difficulty level of this section was similar to that of the morning and afternoon slots. Once again, the selection of sets was difficult but students who selected the right sets would have done well.

As was the case with the other slots, all the sets appeared to be difficult because understanding the context of the set required some time. Understanding the situation of the set was slightly more difficult than the solution itself. Those who were able to unearth the situations from the given description without spending a lot of time stand a good chance of scoring well.

The Mortality rate set was based on bar graphs, and it was the easiest set in the section. The questions did not pose a serious threat and solving it should have been straightforward. The one issue with the set was that the dataset was large. As a result, there was a lot of scrolling involved making it difficult to read the data. But barring the scrolling, the questions were not difficult. Students should have attempted this set.

The Disease set was a difficult Distributions set. There were multiple cases involved in it and those trying to arrive at a unique solution would have had to invest a lot of time in the set. A good approach for those who attempted this set would have been to answer one or two questions based on partial solution. Even then, this was difficult to solve.

The Students set was the most difficult set in the section. Students had to find out the distribution of Computer science students and non-Computer science students. There were a lot of ratios involved in the set and it would have eaten up a good chunk of a student’s time. This was a set that one would be better off not attempting or attempting after solving easier sets than this.

The Rounds and Bets set was a difficult set to solve. There were only two cases in the set – minimum and maximum but exploring the cases was time consuming. The set required a student to make a lot of inferences from only a few data points, overall making it a difficult set.

On the whole, the DILR section was tough with only one set that could be qualified as must-solve. The other sets were tough to understand or tedious and time consuming to solve.

The difficulty levels of the four sets are summarised in the following table: 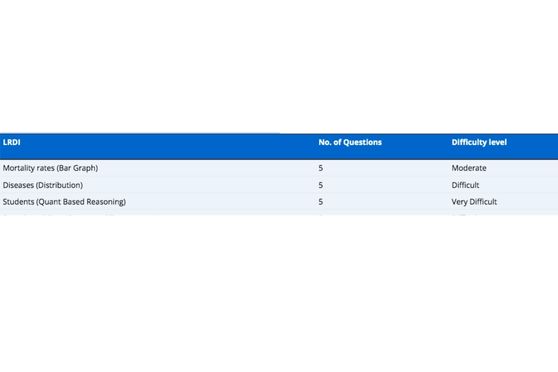 A net score of 14-16 would be a decent score for a test-taker to be able to get 85 percentile (sectional cut-off).

The Quant section of the evening slot had a similar distribution of easy, moderate and difficult questions. However, it was slightly easier compared to the morning and afternoon slots.

The questions were scattered across different topics and the strategy of focusing only on a few topics would have backfired. Easy or moderately difficult questions from familiar topics did not involve direct application of standard formulae and there were not a lot of standard models asked. Some of the students would have ended up investing too much time in questions as the questions required a good amount of understanding before figuring out the approach. This may have prevented students who tried solving questions in sequential order from reaching the end of the section, thereby missing out on some easy questions.

Unlike the morning and afternoon slots, Geometry and Quadratic equations dominated with 4 questions each. AMA, too, made its presence felt with three questions. Time and Work and Time and Distance pitched in with two questions each.

The distribution of questions across topics was as below: 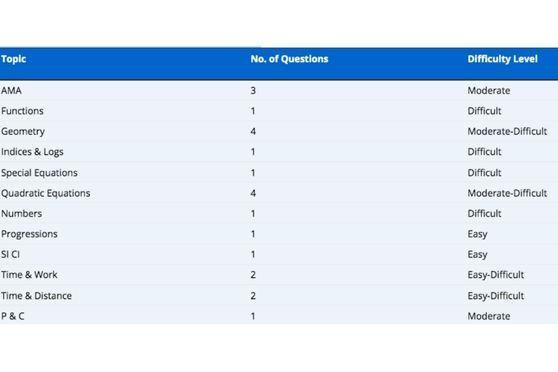 A net score of 15-17 would be a decent score for a test-taker to be able to get 85 percentile (sectional cut-off).

This analysis is written by Mr. Ramnath Kanakadandi, who is an alumnus of Indian Institute of Management, Ahmedabad and is the CAT Course Director at Triumphant Institute of Management Education Pvt. Ltd (T.I.M.E.). He has 20 years of experience in senior management positions across industries in areas of engineering and technology, business process outsourcing and test-prep.