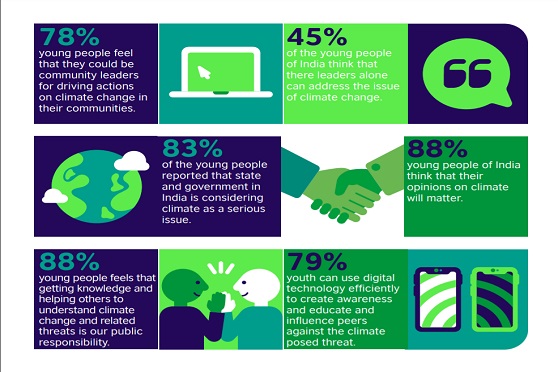 The research is part of the British Council’s Climate Connection programme, which aims to bring people around the world together to address the challenges of climate change. Image Source: British Council

Advertisement
Summary
94% of the youth considers social media as a great awareness tool and 79% feel they can use digital technology efficiently to educate and influence peers against climate posed threats
Based on research and cultural relations work by the British Council, the Global Youth Letter report highlights a gap in relation to young voices being heard and their ability to influence actionable change

Young people around the world unanimously consider climate change to be the biggest threat facing the planet, according to a Global Youth Letter report published by the British Council in the run-up to COP26

The COP 26 UN Climate Change Conference was held in Glasgow from October 31 to November 2.

The report, based on research and cultural relations work by the British Council, highlights a gap in relation to young voices being heard and their ability to influence actionable change.

Young people in India aged 18 to 25 were surveyed for the Global Youth Letter Report, through 946 surveys and 80 focus groups. The report found that 78% of the youth in India felt equipped to act against issues arising from climate change such as loss of forest cover, decreased agriculture productivity, dry seasons, rise in temperature, uneven rainfall pattern and loss of biodiversity. However, the research indicated that finding opportunities for participation in solving such issues is also a challenge faced by the youth of the country, because of limited digital access, hierarchical social cultures that exclude young people, and a lack of access to training and skills development.

Awareness is also a challenge, the report suggests, as climate change hardly ever features as a part of social conversations with friends, while schools and universities do a considerably better job of discussing climate change issues both in urban and rural geographies.

Eighty-eight per cent of young Indians feel that gaining knowledge and helping others to understand climate change and related threats is a public responsibility and 79% believe that a combination of policy-level changes, education through multiple channels, including social media, and campaigning through activism can be used as a powerful tool to address climate change.

The youth of the country believe their opinion on climate will matter and the message to the leaders is that they must be included in climate awareness exercises as only 60% have ever been a part of such activities and just 6.5% believe they are being heard and action is being taken.

“The climate emergency is the biggest crisis facing our planet so it’s no surprise that British Council research has found it is the number one priority for young people the world over. We are proud and delighted to see the enthusiastic response from young Indians who have put their signatures to our Global Youth Letter so far, calling on world leaders for urgent action. We look forward to engaging more and more young people through our work in India; they are truly the most influential voices to drive change for shared global challenges that we face today,” said Barbara Wickham, OBE, director, British Council India.

Overall, the Global Youth Letter surveyed more than 8,000 young people from 23 countries, including Brazil, Kenya, the UK and India, about their perspectives on climate change. The research is part of the British Council’s Climate Connection programme, which aims to bring people around the world together to address the challenges of climate change.