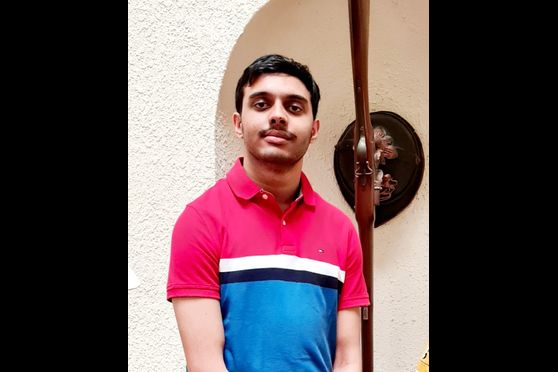 Saptarshi Mukherjee was always a favourite with teachers for his perfect answers. Source: Saptarshi

WBJEE third rank-holder Saptarshi Mukherjee of The Future Foundation School, Kolkata, would be playing chess online when he was not studying. But the hardworking boy made sure he cut down on his play time in the run-up to exams. With a dream to join the Indian Institute of Technology (IIT) Kharagpur, Saptarshi is eagerly waiting for the JEE Main and JEE Advanced results. “I want to take up Electrical Engineering or Computer Science Engineering, preferably in IIT Kharagpur. It is a reputable institute and one of the oldest in India. Also, it is close to my hometown.” Saptarshi is an ardent chess lover and mostly plays the game online. He has kept himself away from social media and his only modes of entertainment are chess and watching television. “During my preparations for JEE, I tried to limit playing chess. I also restricted television time. I watched TV only while eating. I was not that rigid about my study hours and tried not to overdo things. I kept distractions at bay and I think that helped,” he said.

Saptarshi had enrolled at FITJEE to help prepare for JEE but spent seven hours a day in self-study. “There was ample time in the last two years to prepare for the exam. I took help from my teachers and followed their suggestions. I studied for seven hours daily with breaks in between.” Saptarshi comes from a family of engineers and it has been his childhood ambition to become an engineer. “My father and grandfather are both engineers. So, as a child, I wanted to be one, too. I was not as interested in Biology as I was in Physics, Chemistry and Maths. From then on I knew what I wanted to do,” he added. Saptarshi was an all-rounder in school. Debjani Chakraborty, senior Chemistry teacher of The Future Foundation School, said, “Saptarshi is a focused boy and he knows what he wants in life. He was equally good in all subjects. I remember discussing this with other teachers that his answers were so perfect that we could hardly deduct any marks. It is no surprise to us that he has done so well.” When asked about his feelings on his achievement, Saptarshi said, “I am happy but my family, friends and teachers are happier. I will be going to school tomorrow to seek the blessings of my teachers.”

NEET PG Counselling 2022: Results of stray vacancy round out; know steps to check

ICON Nobin Boron’22: A Delightful Welcome Of The Freshers at Presidency University

NEET PG Counselling 2022: Results of stray vacancy round out; know steps to check

CAT 2022 answer key and response sheet to be out soon; check details here