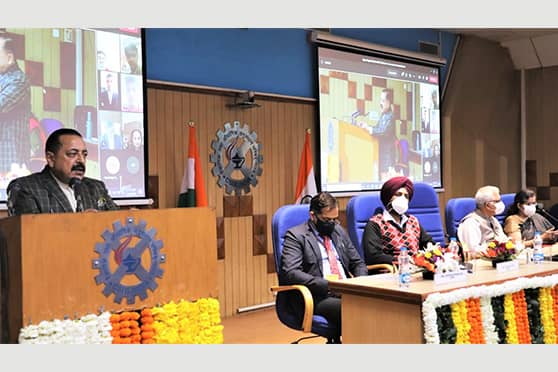 The minister recently announced the winners of the National Level Scientific Creativity Competition organised by the Council of Scientific & Industrial Research (CSIR) under Jigyasa Vigyan Mahotsav 2022 to celebrate India’s 75 years of independence.

After announcing the winners, Singh urged the CSIR Jigyasa team to continue mentoring students so that they can lay strong foundations for the “Roadmap 2047” and help India solve various challenges and make it a global leader.

He laid emphasis on the engagement of the future generation of scientists and technologists to highlight science, technology and innovation from every part of the country.

CSIR Jigyasa Vigyan Mahotsav 2022, launched on January 3, had reached out to more than 20,000 students through bootcamps across the country.

Seven bootcamps with futuristic themes in areas like Energy, Health, Artificial Intelligence, Climate Change, Water Conservation, Disaster Mitigation and Agrotechnology were organised wherein science experts could communicate to students about some of the contemporary issues that need greater awareness and S&T based solutions, said Singh.

The minister said that CSIR has various artists, animators and app developers and it organised boot camps on developing content like comics, science fiction, videos, infographics, app development and animations.

These boot camps provided an opportunity for the students to understand the scientific concepts and stimulate their thinking and approach, he added.

He said that not only have the students visited CSIR labs physically and interacted with experts but also connected with scientists through webinars. The minister noted that the CSIR Jigyasa programme has benefitted more than 4 lakh students across the country.

The period between February 22-28 was celebrated as the Iconic week of science and technology ministry under the Azadi Ka Amrit Mahotsav. Jigyasa Vigyan Mahotsav is also a part of this celebration.

Singh gave away the grand prize of Rs 1 Lakh each to three students – Mohammed Hisam, Shruti Nimbali and Sanchi Bansal – for the CSIR’s National Level Scientific Creativity Competition conducted in Hindi and English medium. A total of 75 winners from all over the country were chosen for the awards as part of the celebration of India’s 75 years of Independence.

The children have been evaluated for their creativity, innovative ideas, storytelling ability, the message conveyed, overall aesthetics, out of the box thinking, usability or applicability in the case of apps, videos or animations.