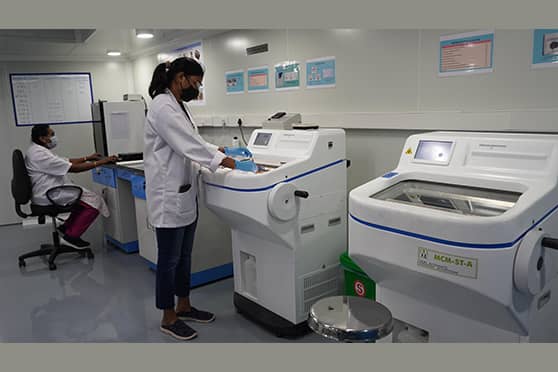 The state-of-the-art centre is a global project that focuses on high-resolution brain imaging, the institute said in a statement recently.

With the target of becoming the leading global centre in research related to the human brain, the facility was inaugurated on March 19. There are plans on training hundreds of undergraduate and postgraduate students in neuroscience, computing, and machine learning techniques on cutting-edge brain data at the centre.

‘Computational and Experimental Platform for High-Resolution Terapixel Imaging of ex-vivo Human Brains’ is the first project undertaken at the centre, supported by the office of principal scientific adviser to the government of India. As a part of the project, post-mortem imaging of human brains of different types and ages are conducted.

The centre has been established with the support of distinguished IIT Madras alumni Kris Gopalakrishnan and Sudha Gopalakrishnan. They have dedicated their lives to research that combines neuroscience and engineering to map the human brain.

At the inauguration, K Vijay Raghavan, principal scientific adviser to the government of India, said, “The combination of IIT Madras, which has expertise in science and data analysis, with medicine is going to be revolutionary. We are at an early stage in our understanding of the human brain's functioning. The IIT Madras brain centre will help in solving complex issues that will benefit the world.”

Kris Gopalakrishnan said, “Entrepreneurship and development in science and technology are important for the nation’s growth. While there have been great strides in supporting entrepreneurship, there is a need for more support to foster world-class research in India. Scientists and engineers play an important role in feeding the knowledge economy of the country. The country has the right talent, resource and opportunity in leading some areas globally.”

V Kamakoti, director, IIT Madras, said, “The brain research centre is a great case study which proves that technology can contribute to medicine and solve societal problems. The centre will make deep in-roads in collecting data for brain research.”

“The technology platform we have developed and our strong medical collaborations, is allowing us to generate high-resolution large-format histology sections of human brains that will advance the field significantly,” said Mohanasankar Sivaprakasam, professor at IIT Madras and head of the Sudha Gopalakrishnan Brain Centre.

Partha Mitra, professor, Cold Spring Harbor Laboratory, and visiting chair professor, IIT Madras, said, “3D digital neuroanatomy of the postmortem human brain with the cellular resolution is a field with great potential for scientific discovery and also for the understanding of neurological disorders. The unique data sets being generated here promise to be widely impactful through open sharing with an international research community.”

Speaking of the collaboration, Varghese said, “The brain research centre has a huge potential in solving some of the major medical issues. The research work undertaken at the centre will help in bringing different outcomes for patients. This unusual combination of science and technology with medicine is the way to go forward.”