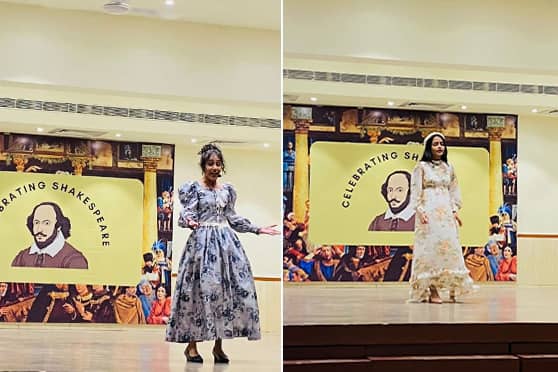 Advertisement
Summary
Students of Classes IX to XII dressed up characters from Shakespeare’s plays, presented monologues and enacted scenes
The intra-school event was hosted by the school’s English club

Students of Sacred Heart Convent School, Jamshedpur, dressed up as characters from William Shakespeare’s plays, some delivered dialogues from his works and others enacted scenes from the plays to mark the Bard’s birthday.

The intra-school event was hosted by the school’s English club.

The programme began with an audio-visual presentation by students of Class X, followed by a series of onstage competitions.

‘Who am I?’ saw students of Class IX dressed up as Portia, Shylock, Lorenzo, Antonio among others. Kajal Bhamra as Portia was declared first.

Next, Class X students presented soliloquies of Hamlet, Macbeth, Shylock and others. Amna Shamim bagged the first prize for Caliban’s compelling speech from the The Tempest.

Class XII students enacted scenes from The Tempest, Julius Caesar, The Merchant of Venice and As You Like It. Class XII C won the first prize for Act 1, Scene 2 of As You Like It.

Unnati Rai as The Prince of Morocco from The Merchant of Venice, Isha Hembrom as Morocco’s aide; and Vanshika Kumari as Rosalind and Preet Gandhi as Celia from As You Like It won special mention from the judges.

The participants were judged on their performance, oratory skill, stage presence and creativity.

"Such events encourage creative study of Literature and give students a platform to showcase their talents,” said Sister Rashmita A.C. , the principal of Sacred Heart Convent.

The students also witnessed a display of 3-D miniature models of the Elizabethan Theatre House.

Ratnabali Sen Gupta, educationist and theatre enthusiast, lauded the students for their performances.

Theatre enthusiast Niloy Mitter seconded her. “Organising such innovative events gives students an opportunity to prepare and understand the wider aspects of literature and theatre,” he said.