Noam Chomsky speaks on ‘The Human Capacity: Language and Thought’ 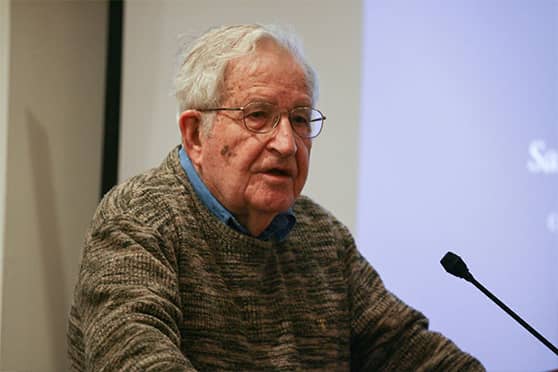 Noam Chomsky’s web talk at AMU was attended by over 1000 people from various parts of the country and the globe. Source: Shutterstock

Advertisement
Summary
Chomsky suggested that children are born with an innate ability to learn language and grammar is a vital skill needed for children to learn language
According to Chomsky, the human brain is ready to quickly acquire language at specific stages in the developmental process

Celebrated thinker, linguist, philosopher and cognitive scientist, Noam Chomsky easily made it plain why humans possess the capacity for language and ability to use it in endlessly creative ways. He delivered a talk on ‘The Human Capacity: Language and Thought’ at the department of Linguistics, Aligarh Muslim University (AMU), recently via a webinar.

Chomsky pointed out that individuals are born with a predisposition to learn language and from the earliest of days, we have named and described things to tell others about what is happening around us.

According to Chomsky, the human brain is ready to quickly acquire language at specific stages in the developmental process.

Speaking on the role cognition plays in the acquisition and development of language, he threw light on linguistic factors influencing general cognitive development.

“Language can be described as an aspect of cognition and its development as an aspect of the development of cognition. There are a number of cognitive systems which seem to have distinct and specific properties and they provide a basis for certain cognitive capacities — for simplicity of exposition,” he emphasised, adding, “The human mind comprises an extensive cluster of innate ‘modules’, one of which is language. Each module operates automatically, independently of individual control, on the basis of a distinct, domain-specific set of rules that take determinate inputs from some modules and yield determinate outputs for others. The various modules interact in complex ways to yield perception, thought, and a large number of other cognitive products.”

Speaking on language acquisition, Chomsky suggested that children are born with an innate ability to learn language and grammar is a vital skill needed for children to learn language. He disregarded the role of imitation alone - especially if the adult is using a structure that the child themselves has not started to use yet. “I also like to believe that language is complex and with an unlimited combination of sounds, words and phrases, environmental learning is not able to account for language acquisition alone,” he said.

Conducting the programme, M.J Warsi, chairman, department of Linguistics at AMU, said, “We were fortunate to have prof Chomsky here (virtually) and our students, faculty members and scholars from around the globe have got the opportunity to interact with one of the most influential scholars and brilliant minds of the world. His talk, as always, has been much deeper and insightful, connecting many points, to answer many of the complex questions.”

S. Imtiaz Hasnain conducted the question and answers session, while Shabana Hameed extended the vote of thanks.

Over 1000 people from various parts of the country and across the globe attended the web talk.