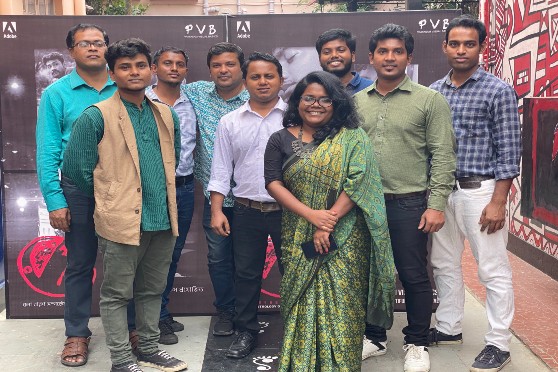 Eight short films scripted and directed by a group of young students will be screened at the annual Bad and Beautiful Film Festival presented by Prayasam Visual Basics.

The anthology titled Resh is based on the theme of acceptance in human relationships will be screened virtually from December 3.

A non-profit organisation based in Kolkata, Prayasam has been working with children and youth to upskill them in extra curricular activities, filmmaking, journalism and other fields. It was founded in 1996 to help children and young adults follow their passion and hone their talents.

Through its work, Prayasam also tries to make people aware about sensitive topics.

“Through these movies we wanted to find out how sensitive we are about these issues,” said Mili Roy, president of Prayasam.

Here’s a look at the eight films based on an interaction with the script writers:

The anthology starts with Dekha. The film is a conversation between a father and a son who is living with his transgender partner. Hounded by neighbours, the family leaves the neighbourhood and the father disowns the son. On meeting him after his mother’s death, the father is still adamant about not accepting his son.

“I tried to depict the perspectives of both the father and the son. The father is torn between love for his child and societal taboos. We tried to end this with a little

Positivity,” said Sheikh, 23, who has scripted the film.

Sheikh joined Prayasam when he was just three years old. He learnt scriptwriting and filmmaking at Prayasam Visual Basics.

Dumbell Dumbell is a story about self-exploration where a couple break up. The boy then goes on to explore himself in a relationship with another boy and finds his true self.

“Many teenagers don’t get to talk about themselves and their feelings with anyone. The boy is in a relationship where the girl doesn’t like to listen about his issues and breaks up. But finally he dates another boy who accepts him for who he is and realises that it is understanding that was lacking in the past. We intended to portray a positive side to the story,” said script writer Avijit Marjit.

Dutto is a conversation between two boys who are in a relationship but for the world they are best friends. When one's family raises the topic of marriage and bride-hunting, the other is furious at his partner's casual behaviour. What happens at the end is sweet and heartwarming.

The script is written by Saptarshi Ray, a mentor director of social media at Prayasam. “I wanted to normalise the subject so that people talk about it at least,” Ray said.

This is a short film about a mother-son duo running a dry cleaning store. The son is closeted but often speaks about ‘female’ fashion which makes the mother say it would be better if he was born as a girl. The boy, in the absence of his mother, tries out a sari and dreams of living in his own world.

The story scripted by Ateswar Mondal is based on real-life incidents.

A boy who hallucinates a friend who is everything can’t be is the protagonist of this film. The boy interacts with this imaginary friend and considers him as his saviour. Script writer Prasanta Roy is the director of hospitality at Prayasam. “We all look

for a friend who thinks alike. Here also the boy is suppressed in expressing

himself and then he hallucinates a friend who is his alter ego,” Roy said.

It is a sweet story about a delivery boy and a man. Both like each other’s company as they share a lot of things in common. But class difference comes in between their friendship. “We tried to give the message that if a person is attached to another person, as a friend or a partner, class can never be an issue,” script writer Aman Mukhiya said.

An ailing father and a busy son do not get enough time together. The father finds companionship in his son’s friend. The son is extremely embarrassed when he realises he doesn’t know his father half as well as his friend. “Durbin or binoculars bring things closer. In this story, too, the son gets to know his father better and their relationship strengthens,” said script writer Manish Chowdhury.