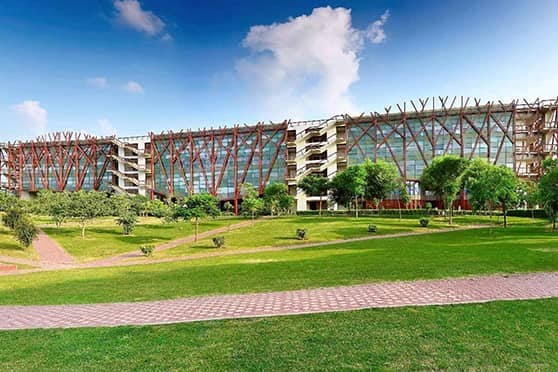 The awards were a follow-up to the 5th World Congress on Disaster Management held in November in Delhi. OP Jindal

Advertisement
Summary
The university was awarded for its work in the fields of disaster management and risk reduction
A total of 35 individuals, organisations and universities were honoured for their contribution

The OP Jindal Global University (JGU) has been honoured with the World Congress on Disaster Management – Disaster Risk Reduction (WCDM-DRR) Award 2022 for its significant contribution in the field of disaster management and disaster risk reduction.

The awards were presented by G. Kishan Reddy, Union minister of tourism, culture and development of north-eastern region of India. Increasing risk of disasters and persistent adverse impact of disasters on the lives, livelihoods, economy and environment have posed serious threats to sustainable development.

As per the global database of disasters, during the past two decades, there were as many as 12,732 disasters in which 1.47 million people lost their lives, 3.9 billion people were affected adversely, and economic losses of $ 2.47 trillion was suffered around the world.

The WCDM-DRR awards honoured the central, state governments, universities, institutions, PSUs, CSOs, individuals and armed forces, who have excelled in this field by the way of bringing new practices, improving existing ones, upgrading the tools and skills and fostering innovation. A total of 35 individuals, organisations and universities were honoured for their contribution to disaster management.

The awards were a follow-up to the 5th World Congress on Disaster Management held between November 24 and 27, 2021 in New Delhi. The 5th WCDM focussed on strengthening capacity for building resilience to disasters through expert deliberations on three critical issues – technology, finance and capacity.

In his chief guest address, Reddy said, "We always salute the tireless efforts of frontline volunteers working at the forefront in times of disaster. It is heartening to see that the important bodies and societies are also recognising the efforts of those involved in disaster management. Through the DRR awards, we have an opportunity to recognise the work of institutions, organisations and individuals. I want to thank the WCDM for bringing all practitioners on one platform to discuss various strategies in disaster management.”

C. Raj Kumar, founding vice-chancellor of OP Jindal Global University and professor said, “JGU's efforts towards disaster management and sustainable development have resulted in the prestigious DRR award. The award showcases our commitment to creating a world based on sustainable development and having graduates who are sensitised to the most pressing challenges that the world faces today, including such key concerns as climate change. The award speaks volumes about this young university’s endeavours towards a healthier and safer environment by implementing the 'sustainable development goals'. JGU released a first-of-its-kind implementing the Sustainable Development Goals: Role of Universities and Civil Society in Protecting the Environment Report, mapping its compliance towards the 17 Sustainable Development Goals (SDGs) set by the United Nations. Setting a global benchmark, JGU has become one of the first universities to fully commit to and implement the SDGs on its campus, despite the challenges posed by the COVID-19 pandemic."

Speaking on the recognition, Dabiru Sridhar Patnaik, professor and registrar of JGU said, "India is among the most vulnerable countries with respect to climate change, according to the Global Climate Risk Index Report 2021. In recent years, disasters have become frequent across the country. The world is facing one of the worst pandemics in hundred years, and given the severe impact on economic and social development, it is imperative to build resilience to disasters through teaching, research, capacity building. Therefore, at JGU, we are also offering courses on humanitarian assistance and disaster relief in complex security environments; environmental hazards and disaster resilience."

Highlighting the significance of disaster management, JR Midha, justice and former judge, Delhi High Court said, “For the last two years and more, the whole world is struggling against COVID-19. The disaster management authorities as well as the people who have contributed in terms of innovative work and have contributed to control the pandemic, have put in great efforts. The more we are interfering with nature, we have to be ready to face its consequences and we should take efforts to prevent such things happening in the future.”

Echoing his thoughts, MM Kumar, former chief justice, Jammu and Kashmir and former judge of the Punjab and Haryana High Court at Chandigarh said, “The subject of disaster management has assumed greater significance. Whenever there is a crisis, we must know how to emerge out of it. I appreciate the type of books that have been released today. It shows how much labour has been put in this field and I’m sure that in the days to come there would hardly be any disaster that cannot be solved with the help of this literature."