No water, no electricity; Indian students in Ukraine’s Sumy fast running out of supplies 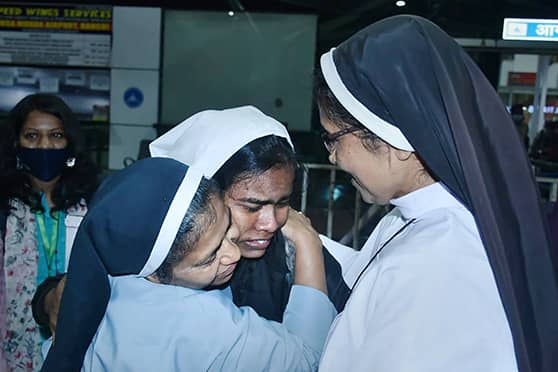 Latika Thitio, an Indian student rescued from Ukraine, reunites with her family in Ranchi on March 6. Source: PTI

Advertisement
Summary
The students had on March 5 posted a video clip declaring they had decided to risk the walk to the Russian border in biting cold amid the fighting, raising fears about their safety
There's no money in ATMs, girls don't have sanitary napkins, say students

Melting snow to quench their thirst and fast running out of supplies, hundreds of Indian students trapped in war-torn Ukraine's Sumy stand on roads every morning hoping to be rescued from the savagery of the war that has engulfed the European nation.

The wait, however, has got longer for these students as fierce fighting blocks their way to safety across the Russian border.

They have abandoned the idea of undertaking an arduous journey to the Russian border on foot amid fusillades of artillery fire and missile barrages a day after the Indian government assured them safe evacuation.

Twenty-five-year-old Jisna Jiji, a medical student, said they have no option but to wait patiently as walking to the Russian border is filled with danger.

Exasperated, the students in Sumy, a city in north-eastern Ukraine, had on March 5 posted a video clip declaring they had decided to risk the walk to the Russian border in biting cold amid the fighting, raising fears about their safety.

Soon after the video went viral, the Indian government asked the students to remain in shelters and assured them they will be rescued soon.

Aashiq Hussain Sarkar, also a medical student, tweeted, "Every day at 6am students wait for buses on the road. We still believe today is the day. But they keep postponing the date every day. Please don't break our hope."

With most roads and bridges destroyed in the city and no transport available, Jiji said it was "impossible" to reach the border.

"Moreover, we have heard that the few foreign students who had managed to reach the border were sent back by the military. So, we have decided to wait," Jiji said.

Jiji said that many students were crammed in the basements of their hostels, melting snow to quench their thirst with little food left, and power and water lines snapped.

"We are still in Sumy. We have not got any update on our evacuation. But we cannot continue like this for long. Our problems are increasing day by day. We appeal to the government to update us immediately," said a girl in a video message.

"There is no water here, electricity supply has been disrupted. There's no money in ATMs, girls don't have sanitary napkins," said another student in the same video.

India had on Saturday "strongly pressed" the Russian and Ukrainian governments through multiple channels for an immediate ceasefire in Sumy to ensure a safe passage for around 700 Indian students stranded there.

External affairs ministry spokesperson Arindam Bagchi said the government was not in favour of students venturing out till a safe passage was made available. Bagchi also said India's main focus was now on evacuating the students stranded in Sumy after the safe exit of Indians from Kharkiv and Pisochyn was almost complete.

"Stop asking Sumy students why didn't we leave Sumy. As if we had a choice and we didn't go with it," Jana Kalaji, another medical student tweeted.

In the last few days, the students have been sending SOS messages and posting videos on social media, pleading for their urgent evacuation.

The war in Ukraine has entered its 10th day without any indication of humanitarian corridors getting created for the passage of foreign nationals to safety.

To evacuate its citizens from war-hit Ukraine, the Indian government has launched Operation Ganga under which thousands of stranded people, mostly students, have been evacuated from nations bordering Ukraine's western frontiers. However, the evacuation from the eastern part remains a challenge.