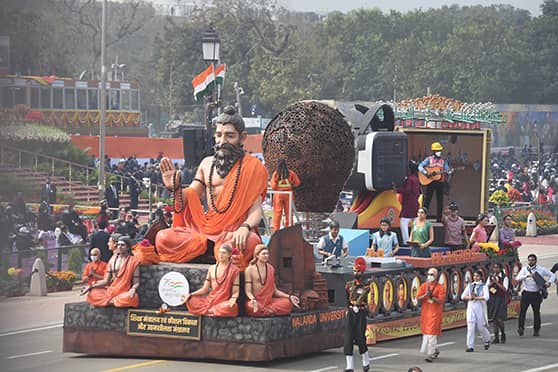 The Union ministry of education and ministry of skill development and entrepreneurship tableau. PHOTO: PTI

Advertisement
Summary
‘Vedas to Metaverse was the theme of tThe Union ministry of education and skill development's tableau
Netaji Subhas Chandra Bose and the Indian National Army (INA).were depicted in a floral float by CPWD

The Union ministry of education and skill development tableau at the 73rd Republic Day parade on Rajpath, New Delhi, showcased the key aspects of the new National Education Policy through the theme ‘Vedas to Metaverse'.

The front portion of the Netaji tableau depicted a bust of Bose in a saluting pose, while heroes of the INA were portrayed on a kiosk through old photographs. The Indian national flag could be seen at the heart of the tableau.

As the tableau rolled down Rajpath, an audio clip of Netaji exhorting people to fight for the country's independence, was played, while many members of the troupe wore matching INA uniform as a tribute to the Azad Hind Fauj.

Historical events of Moirang war, where a tricolour was being hoisted by the INA for the first time on Indian soil on the morning of April 14, 1944, was shown in rear portion of the tableau.

Strains of Kadam kadam badhaiye ja was played during the display on the ceremonial boulevard. 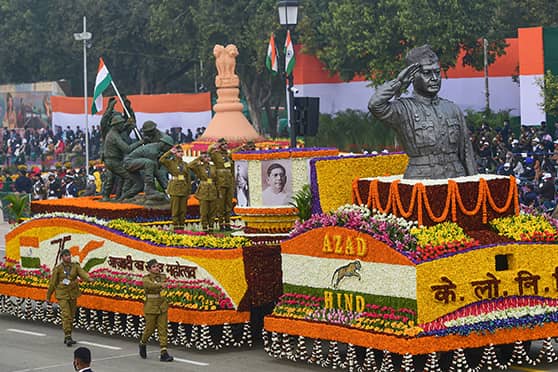 The education ministry’s tableau depicted the glorious past of the country in the area of education, starting from the Vedas, the Gurukul system of education and ancient universities such as Nalanda where students from all over the world had studied.

Videos on the LED screens of the digital book placed atop the tableau illustrated multidisciplinary education, research and innovation, start-ups, robotics and metaverse.

Images of educationists and scientists from ancient times to the modern age could also be seen on both sides of the tableau.

The NEP approved by the Union Cabinet in 2020 replaced the 34-year-old National Policy on Education framed in 1986 and is aimed at paving the way for transformational reforms in school and higher education systems to make India a global knowledge superpower.

A choice between three or four-year undergraduate courses, multiple entry and exit options in degree courses, adding 3.5 crore seats in higher education institutions, which will now have a single regulator, discontinuation of MPhil programmes and fixation of fees are among the higher education reforms outlined in the new policy.

How to become a professional gamer? 6 steps to get started

7-Step Guide to preparing for Government Exams: UPSC, SSC and others