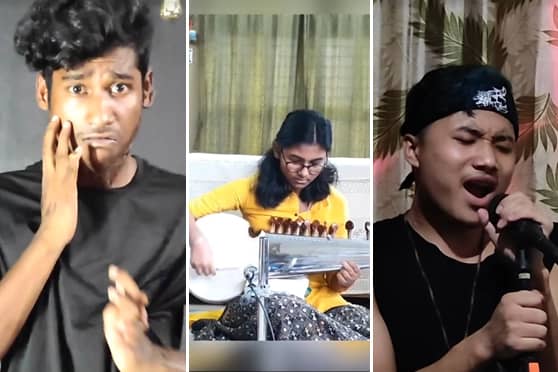 Advertisement
Summary
100 participants were picked from 12,000 entries and trained by mentors
Vishal Kumar Yadav, Aronya Nandan and Daisuanglung Kamei received a cash prize of Rs 25,000 each

About 12,000 applicants had registered for the virtual competition across various categories. Only 100 of them made it to the finale. The top 100 participants were specially trained by dancer Madhavi Mudgal, singer Nikhita Gandhi, violinist N. Rajam, and vocalists Rudrapatnam Thyagarajan and Uday Bhawalkar.

The title of National Winner was awarded to 19 participants across India. The winners received Rs 25,000 and a stunning trophy each.

Among these 19 children, 3 children from eastern India have secured the title and the cash prize. Let us meet them.

Meet the winners from eastern India — Vishal Kumar Yadav, Aronya Nandan and Daisuanglung Kamei were all browsing social media when they came across the ad for SIFF Young Artiste Festival 2020-2021. That’s when they grabbed the opportunity to take their talent to a national platform.

A burn survivor, dance had helped Vishal spring back to life.

He could relate to the story of Chhapak since he himself is a burn survivor. “I was in Class VI when a gas cylinder burst in our house. I was alone. I was wearing a jersey that caught fire and burnt my body, damaging the skin of my hands, face and torso. For a few years, I could do nothing,” Vishal recalled.

For the final, Vishal performed to a mixed track of three songs — the title tracks of Chhapak and Meri adhuri kahani and Abhi mujh mein kahin from Agneepath.

“I could relate to the story of Chhapak. I was in Class VI when a gas cylinder burst in our house. I was alone. I was wearing a jersey that caught fire and burnt my body, damaging the skin of my hands, face and torso. For a few years, I could do nothing,” Vishal recalled. But the accident didn’t stop him from dancing.

Vishal had never received any professional training before the competition but picked up dance moves on his own by watching videos.

He came to know about the SIFF talent hunt from Instagram and decided to give it a try. He sent two dance videos, based on which he was selected.

“They saw my dance and liked it. I was mentored by dancer-choreographer Diya Naidu and others who taught me many things. It was a great learning experience for me,” said the graduate from Bharati Hindi Vidyalaya.

Vishal’s parents were elated when they came to know he had won a national competition. “They were so happy that they brought a cake for me late at night. We cut the cake at home. Friends also gathered to congratulate me,” said Vishal.

Asked about the challenges he faced during the competition, Vishal said, “It took me time to pick up the moves during the training sessions since I had no prior training. But the mentors kept motivating me and teaching me. I never thought I'd be able to win anything.”

Vishal wishes to save the cash prize and utilise it to learn dance in a professional institute.

Aronya Nandan was five when he started playing sarod.

She came across a Facebook post on the SIFF Young Artiste Festival and decided to give it a try. “I sent a two-minute clip but had no expectations. I just wanted to see where I stand and also wished to learn more from this opportunity,” said the first-year student of BSc in Economics at Bethune College.

Aronya has been training under Debojyoti Bose from the Senia Bangash gharana and is also a disciple of Amjad Ali Khan. Aronya’s mother is also a classical singer.

Aronya played raga Jog for the audition and Bageshree and Pilu for the semi-classical piece.

“My family was happier than me. I was happy but more than the title and prize, my reward was being mentored by Anupama Bhagwat. The way she congratulated me and gave me advice was more precious,” said Aronya.

A choir singer at church since he was four, Daisuanglung Kamei even sang in tune as a baby!

Daisuanglung’s entry for the SIFF Young Artiste Festival was a hymn. “I was not sure if I would make it but I wanted to try. I sang Thank you Lord and I was selected,” he said.

The competition was tough but Daisuanglung had faith in himself. For the finals, he sang Broken, a song written and composed by him.

With proper guidance from the mentors, he learnt many new things that sparked the interest of learning more. Prior to this, he had not taken any professional training in vocals.

Daisuanglung completed his schooling from Seven Set Annexe Higher Secondary School and wants to focus on learning vocals. “I am now learning in two music schools. I want to become a playback singer and release my own music albums,” he said.

Daisuanglung’s father is a pastor in a church and also a singer-composer. “He supports me in my passion and he was very happy when I won the award from SIFF.”

Daisuanglung lost his mother in 2018. “My mother loved to sing and listen to music. She supported me a lot. I wish she was here. But I know she is watching me from above and blessing me,” Daisuanglung said.

Asked what he would do with his cash prize, he said, “I wish to release my first album with the cash prize or use it for training.”

Daisuanglung can also play the guitar and piano and uploads his songs on YouTube.