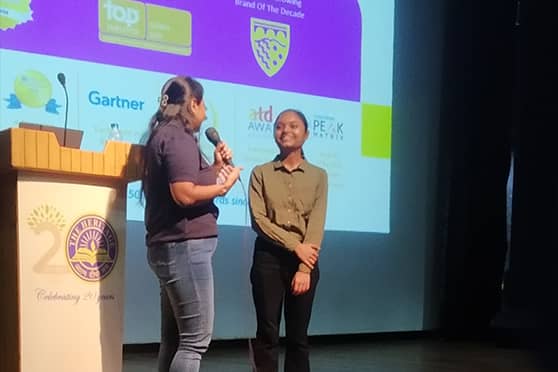 Advertisement
Summary
The global coding competition sees participation of over 3,50,000 students from around the world every year
Padira is pursuing BTech in Computer Science at Heritage Institute of Technology in Kolkata
Padira was the only girl student among the top 30 finalists

Kolkata-based Heritage Institute of Technology (HIT) student Rituparna Padira has emerged as the only female techie to make it to the grand finale of Tata Consultancy Services (TCS) CodeVita 2022, a global coding challenge that promotes the spirit of innovation among students.

A BTech Computer Science student at HIT, Padira was among the top 30 finalists of CodeVita 2022, which saw participation of several lakh students from across the world.

Coding is Padira’s passion and she sees herself as one of the top programmers in the world. Talking about her recent feat, the 21-year-old said, “I love coding, and this competition has boosted my confidence. I was surprised when I received a mail yesterday from TCS. It said that I am among the top 30 finalists in the world, and I could not believe my eyes."

Each year the global coding challenge sees over 3,50,000 participants from different countries. Season 10 of the event, TCS CodeVita 2022, began on March 11.

Padira’s achievement has not only made West Bengal proud, but also brought laurels to her college.

“This is a proud moment for HIT as it shows how well the students of the institute are performing at such international events,” said PK Agarwal, CEO, Heritage Group of Institutions, Kolkata.

S Majumder, head of the Department of Computer Science Engineering, HIT, said, “Rituparna is a hard-working girl and passionate about software programming.”