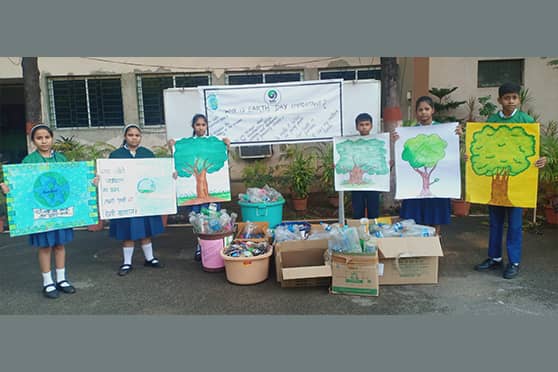 Eleven schools in Jamshedpur joined an initiative by Koru Foundation to promote segregation and recycling of waste. The Earth Day campaign was supported by SwitchON Foundation.

Students were asked to collect old bottles and pens, e-waste, empty medicine strips, oil and milk packets and drop them off at their schools between April 18 and 22.

Children took a vow to take action and protect the earth and keep it healthy so that every day is Earth Day.

The idea behind the campaign was to motivate, educate and engage the community, especially children, and encourage them to work towards climate change through conscious and collective efforts at sustainable waste management.

Koru Foundation co-founder Madhulika Singh emphasised the need to inculcate the right values in children as they are the future.

“As individuals, we have the simple, yet effective, power to make our voices heard through our choices, our civic actions and our personal interactions. What each of us does and how we do it has a huge ripple effect on our ecosystems and on the pace of corporate and government action,” Singh said.

On April 22, 1970, 20 million US citizens took to the streets, college campuses and hundreds of cities to protest environmental ignorance and demand a new way forward for our planet. The first Earth Day is credited with launching the modern environmental movement and is now recognized as the planet’s largest civic event.

In 2016, the United Nations chose Earth Day as the day when the historic Paris Agreement on climate change was signed.

The theme for Earth Day 2022 is ‘Invest in our Planet’. The healthier our ecosystems are, the healthier will be the planet and its people. Restoring our damaged ecosystems will help end poverty, combat climate change and prevent mass extinction.