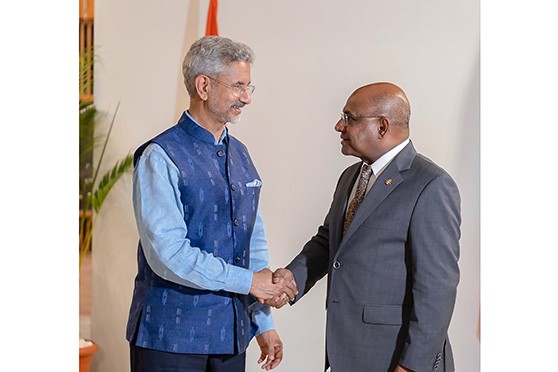 India’s external affairs minister S Jaishankar and his Maldivian counterpart Abdulla Shahid acknowledged strides made in fields of capacity building and training as the two countries inked an agreement paving the way for connectivity between India's national knowledge network and the Maldives' higher education network.

Apart from strengthening bilateral defence and security ties, the partnership has ventured into academics. Jaishankar arrived in Male earlier in the evening as part of his five-day two-nation visit to the Maldives and Sri Lanka to explore the possibilities of further expansion of bilateral engagements with the two key maritime neighbours of India.

The national knowledge network is a multi-gigabit national research and education network, whose purpose is to provide a unified high speed network backbone for educational and research institutions in India. The network is managed by the National Informatics Centre (NIC).

"Foreign minister Shahid and I acknowledged strides made in fields of capacity building and training. With the signing of the peering agreement, over 1,500 Indian institutes, universities and centres of learning from Singapore, Europe and the US are connected to Maldives via India's National Knowledge Network," said Jaishankar.

Shahid said that the peering agreement signed between the Maldives' National Centre for Information Technology (NCIT) and NIC is an important step for cooperation in the field of education, “paving the way for connectivity between the Higher Education Network of Maldives and the National Knowledge Network of India”.

A peering agreement is an agreement between two network administrators to share data routing responsibilities across multiple networks.