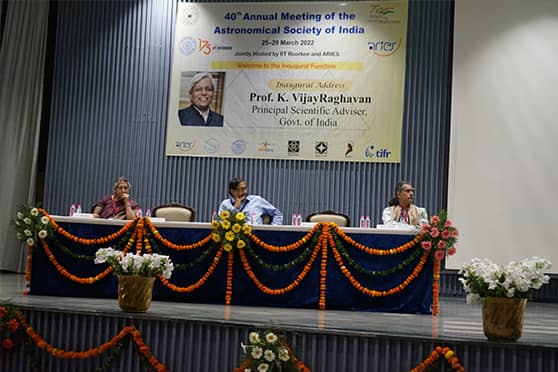 New trends in major areas of astronomy being discussed at the 40th annual meeting of the Astronomical Society of India. Twitter

Advertisement
Summary
The inaugural event was graced by K Vijay Raghavan, principal scientific advisor. Raghavan, a Padma Shri awardee, is a distinguished professor in the field of developmental genetics and former director of NCBS
ASI was established in 1972, so this meeting also marks 50 years of the Society

Indian Institute of Technology Roorkee (IITR) and Aryabhatta Research Institute of Observational Sciences (ARIES), Nainital are hosting the 40th annual meeting of the Astronomical Society of India (ASI) from March 25 to 29, 2022 at the campus of IIT Roorkee. The main ASI meetings are till March 29 whereas the one-day workshops were held on March 25.

The meeting is open to all ASI members, as well as researchers and students in Astronomy and Astrophysics or related areas, affiliated to research institutes/universities/colleges.

The inaugural event was graced by K Vijay Raghavan, principal scientific advisor. Raghavan is a Padma Shri awardee in 2013 is a distinguished professor in the field of developmental genetics and former director of the National Centre of Biological Sciences. His fields of specialisation are developmental biology, genetics, and neurogenetics

While stressing the importance of astronomy and astrophysics in a data-driven world, he said, “With major efforts going on in the country from organisations like ISRO, ARIES, and other eminent bodies to make India a leading researcher in the area of Astronomy; it is imperative for us to broaden the base of astronomy and astrophysics to which ASI is doing so well and scaling up nevertheless. Thus, it gives me great pleasure and honour to be here at the ASI function.”

Ajit K Chaturvedi, director, IIT Roorkee, added, “IIT Roorkee is happy to welcome delegates of the ASI meeting in association with ARIES Nainital. It will provide a wonderful opportunity for the students and faculty of IIT Roorkee to learn more about the fascinating subject of Astronomy. Many programs in IIT Roorkee are directly or indirectly contributing to Astronomy. I hope it will generate more interest in our campus in the field of Astronomy.”

Dipankar Banerjee, director, ARIES, said, “Understanding the critical features of star-planet interactions and their impacts on the planetary environment is a rapidly emerging, interdisciplinary field globally which is recognised by the recent formation of an International Astronomical Union Commission (E4) focused on this issue. Hence, ARIES is obliged to contribute to the emerging progress in observational capabilities of exo-planetary systems.”

ASI was established in 1972, so this meeting will also mark the 50 years of ASI. It has since grown to become the prime association of professional astronomers in India. The society has close to 1000 members. The objectives of the society are the promotion of Astronomy and related branches of science in India.