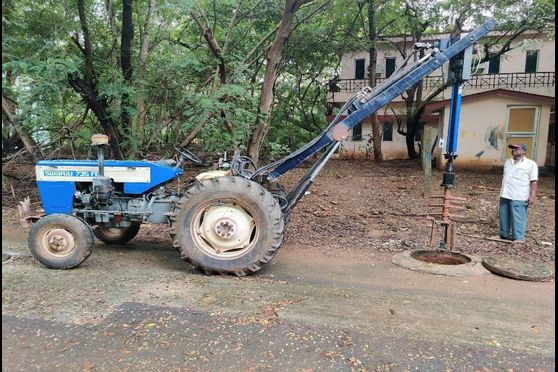 ‘HomoSEP,’ a robot developed by the researchers of Indian Institute of Technology (IIT) Madras to eliminate manual scavenging in India, is all set for field deployment.

A total of 10 units are planned to be deployed across Tamil Nadu with the researchers already in touch with sanitation workers to identify locations. Locations in Gujarat and Maharashtra are also being considered.

This robot has been developed over the last several years by a team led by Prabhu Rajagopal, professor, Center for Nondestructive Evaluation, IIT Madras, and faculty, Department of Mechanical Engineering, IIT Madras together with IIT Madras-incubated start-up Solinas Integrity Private Limited. The team has been in close touch with sanitation workers, and supported by the NGO, Safai Karamchari Andolan (SKA), dedicated to elimination of manual scavenging in India.

Prabhu Rajagopal, principal investigator of the project and faculty, Department of Mechanical Engineering, IIT Madras, said, “The septic tank is a poisonous environment, filled with semi-solid and semi-fluid human faecal material that make up about two-thirds of the tank. Hundreds of deaths are reported every year across India, due to manual scavenging in septic tanks despite bans and prohibitory orders.”

At present, first two HomoSEP units have been distributed to self-help groups led by Nagamma and Ruth Mary whose husbands died tragically during sanitation work, through the support of the NGO, SKA.

In the unique model being pioneered, IIT Madras is empowering enterprises established by such self-help groups, whose key stakeholders will be women impacted by the tragic consequences of manual scavenging. The task of further distribution of nine more units, several of which have already been fabricated as per the project plans, is ongoing.

Rajagopal added, “The HomoSEP project is unique for the way it has brought together the key stakeholders, including the university (our team), NGO, industry CSR and start-up to develop a solution to an urgent and pressing social problem. No doubt the problem is large and complex, and we hope that our effort serves as an inspiration for others to join in the push.”

HomoSEP was first developed as a final year Masters’ project by Divanshu Kumar under the guidance of Rajagopal and showcased at the IIT Madras Carbon Zerp Challenge 2019, after receiving seed support from IIT Madras’ Socially Relevant Projects initiative. Despite the pandemic-related difficulties over the next couple of years, the IIT Madras researchers collaborated with an IIT Madras-incubated start-up Solinas Integrity Private Limited (now headed by Divanshu Kumar) to further develop HomoSEP.

Rajagopal further said, “We are grateful that over the years a number of students, including Divanshu and Bhavesh Narayani (IIT Madras MS alumnus now also with Solinas), have been inspired to work on this project, and today we have a dynamic team, reinforced by Solinas which is a start-up focussed on water and sanitation. Continued support from CSR channels has been vital to our progress so far, and is key to scaling our work going forward. We also hope to leverage support from government channels to mass-produce and distribute our solution on a much larger scale throughout the country from the next year.”

This path-breaking project was supported first by several CSR donors over the years, starting with WIN Foundation in 2019 for initial prototype development. Between 2019-20, GAIL (India) supported further product development and CapGemini supported efforts towards miniaturization and portability of the robot, through their CSR initiatives. Over the last year, NSE Foundation and L&T Technology Services Foundation have commissioned the fabrication and distribution of eight and two numbers of HomoSEP robots respectively, again through CSR support.