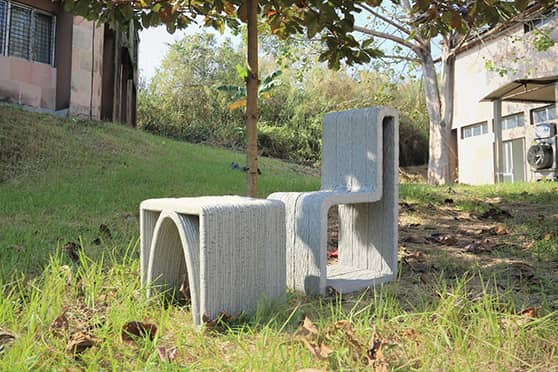 Researchers from the sustainable resources for additive manufacturing (SReAM) at the institute developed new cementitious mix compositions, amenable for 3D printing. The concrete printer jointly developed by IIT Guwahati and DELTASYS E FORMING is capable of printing components up to 1-metre long, 1-metre wide and 1-metre tall. The complete cycle for 3D-printed urban furniture took about 20 minutes to complete.

Concrete 3D printing is gaining momentum in the building and construction industries. Recent developments in this field such as 3D printed modular houses, pedestrian footbridges, office buildings, public schools, low-cost toilet units have the potential to initiate a paradigm change in the practice of construction. 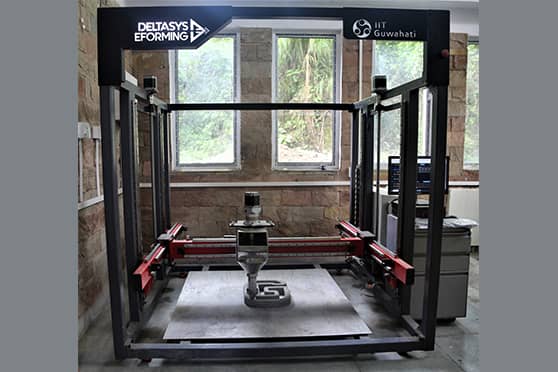 The IIT Guwahati research group used a specially-developed printable concrete containing industrial wastes as binders to build the furniture, and an arch-shaped support that was modelled and sliced using SolidWorks and Simplify3D, respectively. The entire unit was printed layer by layer at an 80 mm/s speed, with each layer having a 10 mm height. After the unit was printed, it was covered by moist gunny bags for seven days to cure before being used.

Traditionally, these structures were mold-casted, which requires more concrete material, labour, and formwork preparation. However, with 3D concrete printing, optimised designs are printed with 75% less concrete and without the need of mold.

Speaking about this Research, Biranchi Panda, department of Mechanical Engineering IIT Guwahati, said, “We showcased how material-efficient structures can be produced in our lab scale 3D printer. Our goal is to design high performance concrete mixes made from industrial wastes for printing of such complex structures.”

The research team believes that the on-demand, on-site 3D concrete printing will definitely have a global impact on versatile construction applications and multi-billion-dollar markets worldwide. The future jobs will be marshalled into design, automation, servicing, and maintenance of the digital systems.