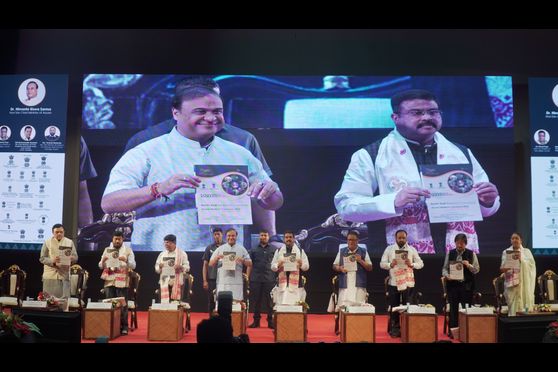 The Indian Institute of Technology (IIT) Guwahati is hosting a three-day North East Research Conclave 2022 from May 20 to May 22.

The conclave is being jointly conducted by the Science, Technology, and Climate Change department and the department of Education, government of Assam, on the IIT Guwahati campus. Around 5,000 eminent personalities from the North-East as well as other parts of India from various sectors such as industry, academia, start-ups, research councils, PSUs, laboratories and technical institutes, schools and colleges are taking part in the conclave.

The inauguration of the conclave was followed by the signing of an MoU between IIT Guwahati and the Government of Assam to establish the Assam Advanced Health Innovation Institute (AAHII).

The scope of this collaboration involves establishing a research institute and post graduate medical college offering advanced medical degrees such as DNB, MD, PhD, MS and MD-PhD and 350-bed multi-specialty hospital spread over 50,000 sq. metre on the IIT Guwahati campus with an outlay of Rs 546 crore.

“I congratulate IIT Guwahati and the government of Assam for organising the North East Research Conclave. There is a need for greater synergy among industry, academia and policymakers for solving the problem of the country and meeting the needs of the poorest of the poor. The NERC gives a platform for all strata of stakeholders to come together and collaborate. This conclave will help create a strong ecosystem of research and innovation and take it to a scalable stage,” said Dharmendra Pradhan, Union education minister.

Sarma congratulated IIT Guwahati for organising the conclave. “Research and development are crucial for a fast-developing nation like India. It is an investment for boosting our capability to make life easier comfortable and advanced. I am hopeful that this conclave will give a unique opportunity for meeting minds and doing something great for the country,” the chief minister said.

The third edition of Assam Biotech Conclave 2022 is also being held as part of NERC 2022. It brings together biotech entrepreneurs, industry leaders, researchers, academicians, government representatives, policy makers, innovators and investors on one platform to explore the possibilities of Biotechnology in North East India and to discuss the new opportunities in the transition.

“The conclave is organised by IIT Guwahati to ensure the successful implementation of National Education Policy 2020 and the promotion of research and development, innovation and start-up culture. This will help in creating a strong research ecosystem, not just in this region, but also will help in networking with Industries start-ups, and entrepreneurs from across the country,” IIT Guwahati director T.G. Sitharam said.