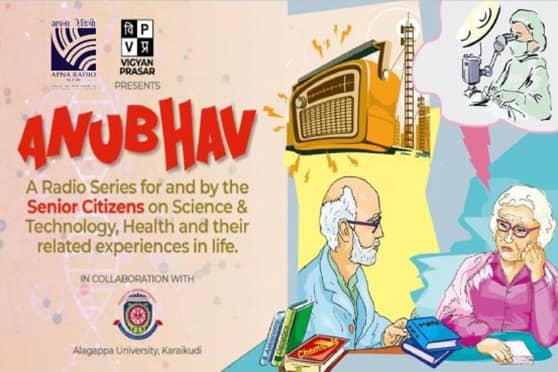 In this radio series, programmes will be broadcast in different languages by six community radio stations of the country and Apna Radio 96.9 FM will produce and broadcast 52 episodes in Hindi language. IIMC

Advertisement
Summary
The radio series called 'Anubhav' will be broadcast for senior citizens
Apna Radio 96.9 FM, is a community radio station run by the Indian Institute of Mass Communications

The students of Indian Institute of Mass Communication (IIMC) have launched a special programme on its own community radio channel targeting senior citizens.

The director-general of IIMC, Sanjay Dwivedi released the poster of a special radio programme for senior citizens by Apna Radio 96.9 FM. On this occasion, head of the department of Apna Radio, Sangeeta Pranvendra was also present.

Apna Radio 96.9 FM, a community radio station run by IIMC, has produced these programmes in collaboration with Vigyan Prasar and Alagappa University, Tamil Nadu. The objective of the series named 'Anubhav' is to disseminate information related to science, technology and health among senior citizens.

In this radio series, programmes will be broadcast in different languages by six community radio stations of the country. Apna Radio 96.9 FM will produce and broadcast 52 episodes in Hindi. The main objective of these programmes is to try to solve the problems of senior citizens on the basis of their experiences.

Apna Radio has been operational for the last 11 years now. Inaugurated in September 2005, it used to broadcast four hours a day. The transmission was extended to seven hours a day in February, 2013.

The radio channel is is closely associated with some NGOs of the area including Chetna, Society for the Promotion of Youth and Masses (SPYM), Can Support, Senior Citizens Welfare Association, (SCWA), Force, Centre for Science and Environment (CSE), Haq, Muskaan, Dastkar and Indus Action. The radio team covers what these NGOs do for the benefit of the community.

Before launching this special programme for senior citizens, this community radio had earlier taken up several other initiatives to help in societal upliftment and students gain experience in being part of a radio channel.

The ‘Beti Bachao Beti Padhao’ campaign has been another milestone for Apna Radio. Students had interviewed Save Female Child activists such as Puneet Bedi, made in-house jingles and spots and produced a Radio Play ‘Khushi’ on the theme.