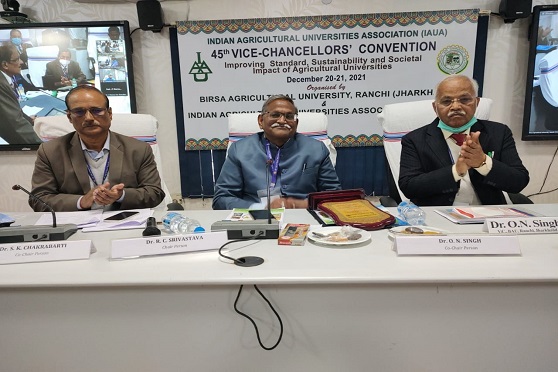 VCs of various agricultural universities at the annual convention in BAU Ranchi on December 21. Source: BAU

Advertisement
Summary
At present, agricultural universities, totalling about 75, represent 9% of the country's public sector universities but intake capacity is only 1%
The two-day IAUA convention concluded at BAU Ranchi and saw 40 vice-chancellors (VCs) from across the country including some who were present virtually

The Indian Agricultural Universities Association (IAUA) has recommended a 10% increase in seats for undergraduate and postgraduate courses annually in all farm varsities to increase Gross Enrolment Ratio (GER) in the higher educational institutions of agriculture and allied disciplines.

At present, agricultural universities, totalling about 75, represent 9% of the country's public sector universities but their intake capacity (GER) is only 1%, which is a matter of concern.

The two-day IAUA convention which concluded at Birsa Agricultural University (BAU) in Ranchi on Tuesday was attended by about 40 vice-chancellors (VCs) from across the country including some VCs present in online mode.

The convention also advocated that organic or natural farming should be conducted in 10% of the country’s arable land with the prime objective of improving soil health and checking environmental degradation. In the initial phase, yield will be only optimal and not maximum but disease and pest management issues will have to be well taken care of.

The establishment and strengthening of the incubation centre for encouraging entrepreneurship and startups among farm graduates for increasing innovation, processing and profitability in the farm sector was also recommended.

BAU VC Onkar Nath Singh said agricultural universities are a mirror of the society in which expectations of the State's populace is reflected. Agriculture being a State subject, its government’s consent will also be required while introducing major shifts in admission policy or starting new courses.

Campus to Corporate, Part 2: 7 things to keep in mind before you join your first job