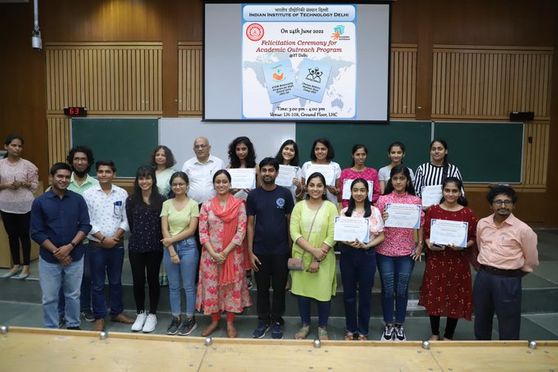 The Indian Institute of Technology Delhi's (IIT Delhi) Academic Outreach and New Initiatives Office organised a Science, Technology, Engineering, Mathematics (STEM) Mentorship Programme for the first batch of Class XI school girls on June 26. In a felicitation ceremony held on the same day, the students were awarded completion certificates by IIT Delhi. The STEM Mentorship Programme was launched in December 2021 for young female students, with the motive of introducing rudimentary concepts within the STEM field and showcasing experimental methods and techniques utilised in Science labs. The programme was conducted in three phases -- a winter internship that began in December 2021 and concluded in January 2022, an online lecture series by IIT Delhi faculty mentors from February to April 2022 and finally, a summer project that began in May and concluded in June 2022, drawing curtains on the mentorship programme. The first batch comprised 10 students selected from government schools in the Delhi region, and each of them were assigned a faculty mentor from the institute. The mentors guided and taught the students for over a period of seven months across several topics, such as artificial photosynthesis, water reuse using nanotechnology, theoretical computer science, artificial intelligence, climate change, brain mapping and neuroscience, optics, vibrations in engineering and engineering of human joint implants. According to IIT Delhi's statement on the primary objectives of the programme, it aimed at "training young students to think creatively about science and innovation, providing them novel hands-on experience in solving research problems, and helping them form a stronger knowledge foundation.” "STEM needs to have more women participation. Through the mentorship programme initiated by IIT Delhi, schoolgirls will get exposure to some of the world-class laboratories and research work going on here. I am hopeful that this mentorship at IIT Delhi will prove to be a turning point in their lives and they will be motivated to enter the world of science and technology and help society with their research work," said V Ramgopal Rao, professor and director of IIT Delhi. Pritha Chandra, professor and associate dean, Academic Outreach and New Initiatives, added: "The programme will give girl students some required traction for getting into the fields of science and technology in the future. We believe that students should be exposed to scientific concepts at an early age, to be able to appreciate the rigour of academic research, and to build up the confidence to take up academics as a career choice when they grow up.” The mentorship programme received an "overwhelming response" and registrations from several schools and students according to IIT Delhi’s statement.

UP Board Class 10, 12 Admit Card To Release Soon, Check How To Download Here