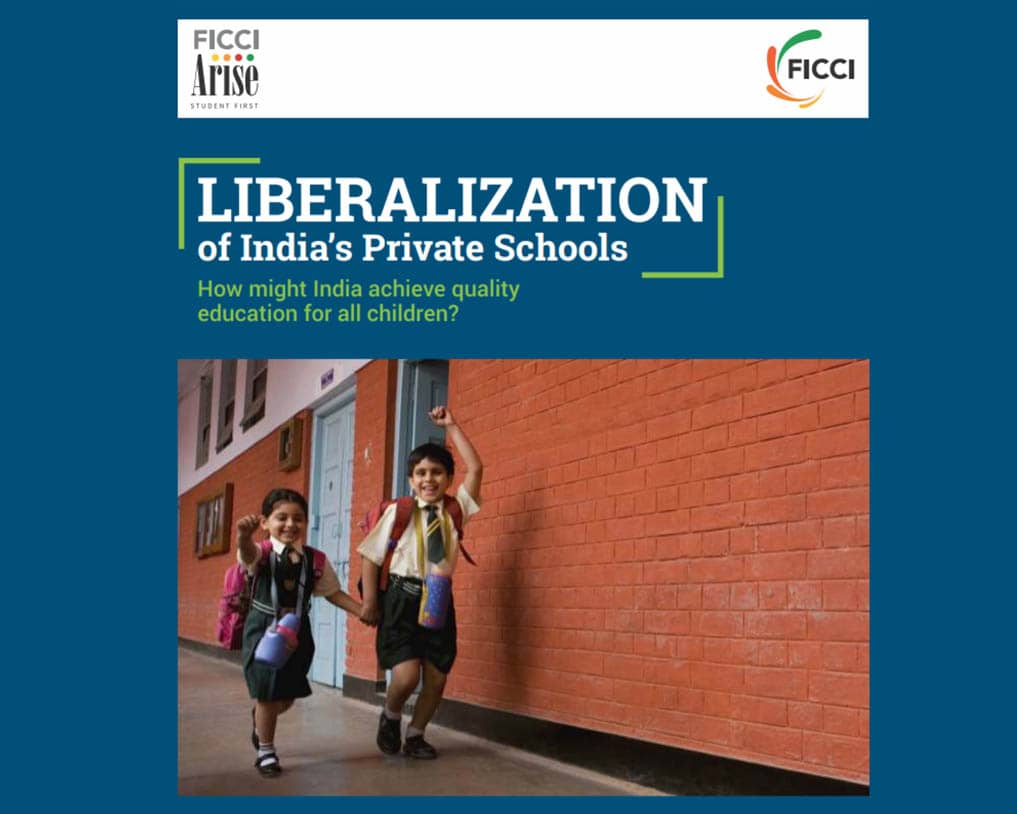 Advertisement
Summary
Nearly 50% of the country's children study in private schools
Suggestions include standardising testing till Class VIII, funding individual student and allowing schools to run on profit along with handing them complete autonomy

The Federation of Indian Chambers of Commerce & Industry (FICCI) Arise has launched a White Paper underlining the need to hold discussions around ways to achieve quality education and meet future learning needs through structural reforms.

Nearly 50 per cent of Indian children study in private schools, unlike most countries worldwide where the percentage of students attending unaided independent schools barely reaches the double digit.

The rise of private schools is thus an important aspect of the Indian education system.

“Typically perceived as ‘elite’, the growth in the private sector has actually been powered by a wave of low-and middle-income families seeking better education for their children… 70% of the students study in private schools that charge less than Rs 1,000 per month, as against government schools that spend about Rs 30,000 per child per annum,” the White Paper points out.

FICCI Alliance for Re-Imagining School Education (ARISE) is a collegium of stakeholders who represent different facets of school education. Members include reputable independent schools from across the country, eminent educators, foundations, civil society representatives, think tanks and technical experts. The report has been authored by Vardan Kabra, co-founder and head, Fountainhead School, Surat, and Anupam Gupta, CA and an expert in thematic research.

The research brought forward ideological arguments on the lack of universal access to quality education for all students and the government’s inability to shore up investments to the required levels, leading to a need for significant private participation.

Manit Jain, chairman, FICCI ARISE, called for liberalisation of private sector schools in India. “The time is right to introduce concrete structural reforms, including decontrolling the functions of the private school system in the country. The private education sector, which can educate far more on a lesser budget than the public education sector, is being stifled by unnecessary layers of regulations. It is a reasonable demand to urge the government to incentivise private players for it alone cannot achieve the target to reach SDG4 by 2030."

According to UNDP estimates, the total financial requirement for India to reach Sustainable Development Goal (SDG) 4 by 2030 averages 173 billion dollars per year, far exceeding the current government budget of 76.4 billion dollars a year for education.

Even the poorest of parents are keen on sending their kids to private schools in the hope of a better education. Private schools need to be provided all the required flexibility and resources to make this goal a reality.

“It took us over three decades to reform our education policy. Where the world is untangling the challenges concerning Artificial Intelligence (AI), Machine Learning, innovative thinking, we are still struggling with basic issues like literacy and access to education. Preparing today’s students for Industry 4.0 requires near transformation of existing schools in the government and independent sectors alike,” said Prabhat Jain, former chairman, FICCI Arise, and director, Pathways World School, Gurugram.

Jain said significant investments were needed for setting up thousands of new- age innovative schools that could become models of change.

Highlighting the poor quality of education and significant fall in enrolment rate of government schools, Gurcharan Das, author and commentator, condemned “license raj” in the school education system. “It is so disheartening to see that a single school requires about 30-40 certificates from various government departments, which in most scenarios are issued only after a series of bribes collectively amounting to lacs of rupees. It deters idealistic and passionate educators from revolutionising and actively contributing to the education system.”

Underlining the findings of the recent NCERT report (2011-15), which compared learning outcomes of public and private schools, Geeta Kingdon, chair of education and international development, professor — UCL Institute of Education, University College London, said, “Over the years, the performance of public schools in terms of learning achievement has plummeted despite the phenomenal increase in government expenditure on education, including teachers’ salary.”

Leena Chandran Wadia, senior fellow, ORF, highlighted four key areas where public schools lag. “Government schools don't have pre-schools as they start at Class I. They also lack age-appropriate schooling, computer-based schooling, and accountability. In rural areas, the cause of poor education boils down to teacher transfer which mars the student-teacher relation,” she said.

The FICCI ARISE report pushes for urgent and bold reforms, including unleashing the private sector's potential in improving the country's learning outcomes. The reforms suggested by the report include restructuring regulatory bodies which overlook the education sector, rationalising the right to education, standardising testing till Class VIII, funding individual students, especially those from economically weaker sections and allowing schools to run on profit along with handing them complete autonomy regarding formalising norms.