Eight teams share their learnings at the finale of I-NCUBATE 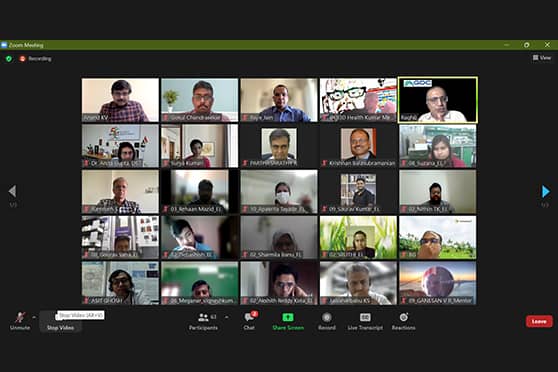 Advertisement
Summary
Anita Gupta, head (National Science and Technology Entrepreneurship Development Board), department of Science and Technology, Government of India, was the chief guest at the finale
The eight teams included participants from IIT Bombay, IISc, Bengaluru, and VIT, Vellore

A total of eight teams from the 19th Cohort of the I-NCUBATE programme organised by the Gopalakrishnan-Deshpande Centre for Innovation and Entrepreneurship (GDC) of the Indian Institute of Technology Madras presented their learnings and narrated how the programme transformed their entrepreneurial journey during the virtual finale held on Friday, March 4.

I-NCUBATE is an eight-week boot camp for early-stage start-ups. It helps these teams to achieve lab-to-market transformation of their research ideas into start-ups that create positive social and economic impact at scale.

Addressing the finale virtually, its chief guest Anita Gupta, head (National Science and Technology Entrepreneurship Development Board), department of Science and Technology, Government of India, said, “The Gopalakrishnan-Deshpande Centre for Innovation and Entrepreneurship (GDC) is a unique concept as it helps the start-ups to identify if they should go ahead with their ideas. This helps in building confidence in young, aspiring entrepreneurs. During my visit to the Research Park of IIT Madras, it was evident that the investors were hunting for start-ups as the Park is a mark of the evolved ecosystem.”

India has progressed well in terms of start-ups. From the government’s side, there is no dearth of funds for supporting start-ups. The aspiring entrepreneurs should reach out to the right department at the right time. In the private sector, there is an array of venture capitalists and angel investors who are willing to invest in good ideas,” she also added.

During the finale, the applicants explained their research idea, innovation, and its potential social or business impact. The team members also explained how GDC’s programme helped them to gain insights into their potential customers’ needs and pain points.

Addressing the programme, Krishnan Balasubramanian, professor-in-charge, GDC, IIT Madras, said, “India aspires to become the innovation hub of the world, and IIT Madras and GDC have unique roles to play in this mission. IIT Madras has a thriving deep-tech culture with over 250 startups and is recognised as India’s leading university-based deep-tech innovation ecosystem. GDC started as an experiment at IIT Madras five years back, has evolved very well and scaled across India. GDC plays a critical role in nurturing this culture, not just within the campus but across the country. Faculty and students from over 35 educational institutions have participated in GDC programmes so far. The spirit of the I-NCUBATE and I-NSPIRE programmes can also be extended successfully to Science and Commerce colleges.”

Speaking about I-NCUBATE’s origins, Raghuttama Rao, chief executive officer, GDC, IIT Madras, said, “The programme was conceptualised drawing inspiration from the I-Corps programme of the National Science Foundation (NSF) in the US. I-NCUBATE was designed by GDC to suit the unique requirements of India’s context. Over the past four years, GDC has conducted nearly 30 cohorts of I-NCUBATE and I-NSPIRE, and these programmes are ready to be scaled to over 500 STEM colleges and technology incubators across India. In the Indian startup ecosystem, while most components have been addressed by the Government, the big missing piece is a robust customer discovery exercise. The government’s support would be critical to scaling up such programmes.”