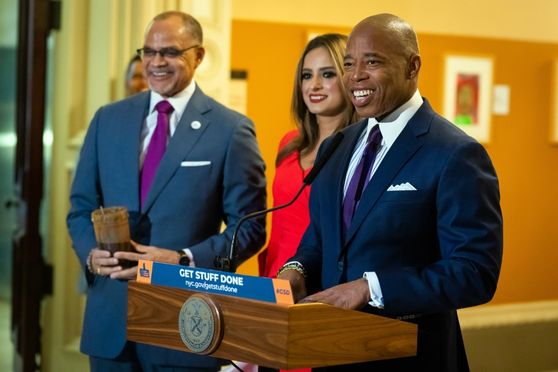 Advertisement
Summary
‘This is an educational moment because when we acknowledge Diwali, we are going to encourage children to learn about Diwali’: Mayor Eric Adams
Consul General of India in New York Randhir Jaiswal thanked Adams for making Diwali a school holiday

Diwali will be a public school holiday in New York City starting 2023 with Mayor Eric Adams saying this sends a message about the significance of the city’s inclusiveness and the “long overdue” step will encourage children to learn about the festival of lights.

Adams, joined by New York Assembly Member Jenifer Rajkumar and New York City Schools Chancellor David Banks, said on Thursday that in his conversations during the campaign trail, he “learned so much” about Diwali and what the festival of lights means.

He said through declaring Diwali a holiday in New York City public schools, “We wanted to send a loud and clear message to the countless number of people who acknowledge this period of time of celebration. “At the same time, this is an educational moment because when we acknowledge Diwali, we are going to encourage children to learn about Diwali. We're going to have them start talking about what it is to celebrate the festival of lights, and how to turn the light on within yourself,” he said.

Consul General of India in New York Randhir Jaiswal thanked Adams for making Diwali a school holiday. “This had been a long pending demand of the Indian-American community. The recognition gives a deeper meaning to diversity and pluralism in New York City while allowing people from all walks of life to experience, celebrate and enjoy Indian ethos and heritage,” he told PTI.

#Diwali symbolizes the victory of light over darkness, and today that light is brighter.@NYCMayor stood in solidarity as @JeniferRajkumar introduced legislation to replace "Anniversary Day" on the school calendar with Diwali. pic.twitter.com/yrryS5DGSk

Rajkumar, the first South Asian-American woman ever to be elected to a state office in New York, said she is proud to say that “our time has come. The time has come to recognise over 2,00,000 New Yorkers of the Hindu, Buddhist, Sikh and Jain faiths who celebrate Diwali, the festival of lights.”

Adams said, “As we deal with so much darkness that is around us, we fail to realise the overwhelming amount of light that is around us. And when we take this period to acknowledge Diwali, we are acknowledging the light that is within us, the light that clearly can push away darkness and that is why this is so significant.” Adams added that the city has identified public holidays like Eid and Lunar New Years. “We do it with so many other days and so many other cultures that we acknowledge. It is long overdue to say to our Hindu, Sikh, Jain, and Buddhist students and communities that, we see you, and we acknowledge you. The inclusiveness of this city is extremely significant and this is our opportunity to say that in a loud way.”

Over the years, there were growing calls by the Hindu community to declare Diwali a school holiday given the hundreds of thousands of Indians living in the area. Once the legislation goes through, Diwali will be a school holiday in the City of New York starting next year. Rajkumar noted people have said that there is simply not enough room in the New York City School calendar to have a Diwali school holiday.

This week, Rajkumar introduced legislation in the state capital that makes room for Diwali in the school calendar. She said her legislation removes Anniversary Day, an “obscure and antiquated” day created in the 1800s so that it can be replaced with Diwali, “celebrated by a growing number of New Yorkers.” "When this is done, the New York City Department of Education will be able to institute the Diwali holiday on the school calendar,” she said, adding that she has brought this bill to the table so that all South Asian and Indo-Caribbean New Yorkers will have a seat at the table.

According to New York State education laws, there must be a minimum of 180 days of school instruction. However, in order to meet this 180-day minimum requirement, no more holidays could be instituted in the school calendar. Rajkumar said by removing the antiquated Anniversary Day school holiday that is observed by no one, her legislation makes room for Diwali to be a school holiday while also meeting the 180-day minimum requirement for days of school instruction. She thanked Adams for his support, saying this is the first time in the history of the city that a mayor has committed to making Diwali a school holiday.

“For over two decades South Asians and Indo-Caribbeans in New York have been fighting for the Diwali school holiday. I stand on the shoulders of those advocates. And now we are finally going to realise that goal,” she said. “Next week, we will celebrate Diwali, a celebration of good over evil, light over darkness, of the human ability to overcome, exemplified by Rama's defeat of evil. We will celebrate the Hindu principles of interfaith, harmony, love, and tolerance for all New Yorkers. “The same Hindu principles that inspired the great American civil rights hero, Martin Luther King, who will celebrate our culture's place in the great civil rights tradition of our country. The sky is the limit for our community,” she said.

Banks said New York City is home to the whole world and children from all communities and backgrounds go to school here. “And it is important that we honour and recognise all of our young people. And so, the recognition of Diwali is yet another opportunity for us to begin to celebrate, uplift and honour those young people, their family and their faith. The celebration of light, the triumph of light over darkness is critically important,” Banks said.

ICSE Preparation Tips: How to prepare for English papers 1 and 2; A complete guide