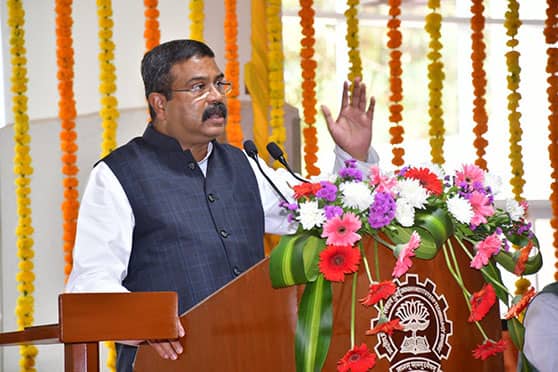 Advertisement
Summary
The hostel has 1,115 rooms and multiple facilities for recreation
The construction of this facility was entirely funded by Higher Education Financing Agency (HEFA)

The minister also unveiled the plaque and planted a tree on the campus of the new facility, Hostel 17, constructed over a period of 40 months.

This hostel is one among the first group of buildings that IIT Bombay has constructed entirely through funds from the Higher Education Financing Agency (HEFA), with an estimated cost of Rs. 117 crores.

The infrastructure boasts of a gymnasium, a common computer room, Wifi and LAN connection in each room, a music room, a common laundry, a first aid room, a student council room, a place for students’ breakout session, a storeroom, a sprinkler piping fire fighting system provided in each room, a public address system and CCTV systems.

Speaking at the inauguration, Pradhan said that in addition to the quality of students, curriculum and faculty, the ambience of the campus is important for a great student experience.

“Ambience creates positivity. If you are positive, you will be comfortable. Everyone has the capacity to innovate and contribute. Today, we have started a new chapter at IIT Bombay,” said Pradhan.

The minister said that he expected employers and entrepreneurs to emerge from IITs. Expressing his firm belief in the prowess of IIT Bombay, the minister said he is confident that the talented human capital of the institute will emerge as employment creators, innovate and work for global welfare, and also work towards building a strong and “Aatmanirbhar” Bharat.

The minister exhorted the IIT Bombay community to play a decisive role in shaping the course of the nation in the coming decades.

“When we look back after 5-10 years, we should be able to say with confidence that IIT Bombay has taken the 21st century into our fold and contributed to the shaping of history,” he said.

The director of IIT Bombay, Subhasis Chaudhuri, presented before the minister an overview of the Institute and its growth over the years.

In his address, Chaudhuri said, “The IIT system thrived under the patronage of the government of India, and our alumni have excelled in all forms of career paths they have chosen. I am sure that this state-of-the-art hostel will help in further improving the campus ambience for the students.”

Pawan Goenka, the chairperson of the board of governors at IIT Bombay, thanked the government for the cooperation and support it has been extending in upgrading the infrastructure of the institute.

IIT Guwahati partners with AICTE to develop solutions for remote institutions in Nor. . .

IIT Guwahati partners with AICTE to develop solutions for remote institutions in Nor. . .