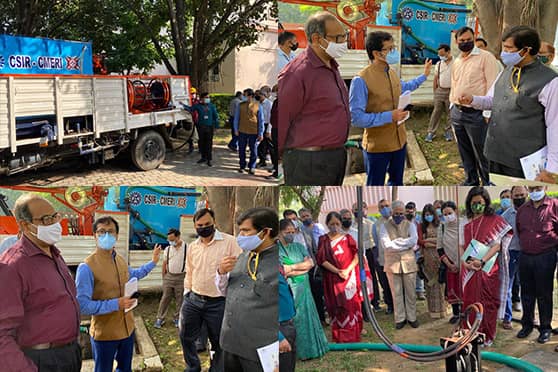 This machine has been developed after intensive studies of the diverse nature of the Indian sewerage systems. CSIR-CMERI, Durgapur

Advertisement
Summary
Machine demonstrated to government and industry representatives at CSIR’s National Physical Laboratory, New Delhi; to be used by Delhi Jal Board
It will help safeguard manual scavengers against pathogens and skill them on the latest technological advancements in sewerage maintenance systems

The Central Mechanical Engineering Research Institute (CMERI) -- formed in Durgapur under the aegis of the Centre’s Council of Scientific and Industrial Research (CSIR) -- has developed an indigenous mechanised scavenging system that promises to carry forward the Swachh Bharat Mission and remove the risks and indignity associated with the scavenging profession.

The mechanised scavenging system was successfully demonstrated to the government and industry representatives at the CSIR’s National Physical Laboratory in New Delhi last week, after a directive given by Prime Minister Narendra Modi at the last CSIR society meeting.

Department of Scientific and Industrial Research (DSIR) secretary and CSIR director general Shekhar C Mande was present during the demonstration and said that the developed device is ideally suited for metros like New Delhi.

Two more versions of the machine have been developed for Tier-2 and Tier-3 cities. He requested the representatives of the three Municipal Corporations of Delhi, Delhi Jal Board and Sulabh International to put this device into use in order to benefit society.

CMERI Durgapur director Harish Hirani explained the effectiveness of an indigenously developed mechanised scavenging system to handle blockages in the sewage pipes caused by plastic and other non-biodegradable domestic waste, intrusion of tree roots and debris among other scraps.

The developed mechanised scavenging system is benchmarked against the available systems in the Indian market, and a number of features have been added which makes it a first of its kind in the country, Hirani said.

The product managed to impress Rupa Mishra, joint secretary of the Ministry of Housing and Urban Affairs, who enquired about the roll out business plan for the developed technology and also commended the reuse of water for drain cleaning.

Delhi Jal Board’s additional chief engineer Bhupesh Kumar lauded the technology behind the mechanised scavenging system and even offered a demonstration of the machine in Keshopur area under the Jal Board.