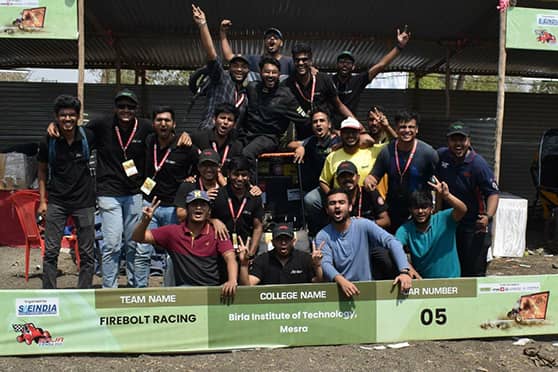 Advertisement
Summary
The team bagged eight-under 10 ranks at the event
It ranked 13th all over the country, its best performance to date.

Firebolt Racing, the official off-road racing team of Birla Institute of Technology (BIT) Mesra, was declared the national winner in sales presentation at the m-BAJA SAE 2022 in Pithampur, Indore, from April 6-10.

The team bagged eight-under 10 ranks at the event. It ranked 13th all over the country, its best performance to date. In the overall virtuals, it was placed at eight and in the overall static rank at ninth.

BAJA SAE India is an inter-collegiate design competition where participants conceptualise, design, build, test and validate a single-seater four-wheel All Terrain Vehicle (ATV). The m-Baja is the conventional competition of off-road cars while e-BAJA has students designing and building electric-powered ATV.

Team Firebolt Racing was represented by a group of around 30 students from the 2018, 2019 and 2020 batches. The club was led by faculty advisor Paritosh Mahata. Umang Srivastav was the captain of the team while Triyan Pal Arora and Shivansh Goyal of the 2018 batch were the vice-captains.

The FRXII ATV in hues of orange and black was driven by Satyam Singh and Akio Apollo Bishwal of the 2019 and the 2020 batches, respectively.

In the Raftaar event, the team was awarded the first runner-up award and boasted the second lightest ATV in the country at 138.5 kg.

In the acceleration event, wherein the team had the least time to run in a 120 metres track. The team stood third in the country. The team ranked fifth in the design event and seventh in the validation event. The team’s achievements also included completing the entire endurance event of four hours.

“Team Firebolt Racing is established as one of the premier and well-renowned automobile racing teams in the country and competed against hundreds of other teams,” said a BIT Mesra spokesperson.

“The team has always believed in hard work and consistency. It has made judicious use of the prerequisite knowledge of top-notch designing software like SolidWorks, Ansys, and HyperWorks, and simulation techniques,” added the spokesperson.