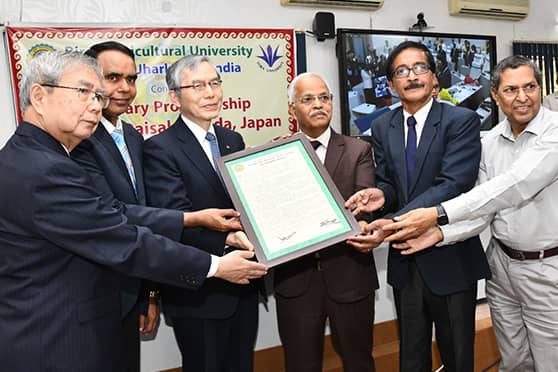 Advertisement
Summary
Founder of Soka University, Japan, honoured for his contribution to green revolution, global peace and new global humanism
A Japanese delegation accepted the award on behalf of the Soka University founder

Birsa Agricultural University (BAU), Jharkhand, has conferred an honorary professorship on Daisaku Ikeda, a leading interpreter of Buddhism, president of Soka Gakkai International (SGI) and founder of Soka University, Japan, in recognition of his outstanding contribution in the field of green revolution, global peace and new global humanism.

Ikeda, 94, could not attend the ceremony in person. In his acceptance speech, which was presented by Yoshihisa Baba, president, Soka University, Ikeda said the happiness of a nation depends on farmers’ peace and prosperity and it was very satisfying to note that challenges faced by the farming community were well taken care of by BAU.

BAU and Soka University had signed an agreement about a month ago for mutual cooperation in the field of teaching, research, publication and other academic activities.

Both universities can exchange faculty and staff, jointly conduct research and consultancy, share information and publications and participate in other activities aimed at the development of booth the institutions of higher learning.

“The agreement will not create an additional financial burden on the institutions. Officials of both the institutions discussed their activities, achievements and infrastructure in the board room for further strengthening mutual collaboration,” said a spokesperson of BAU.