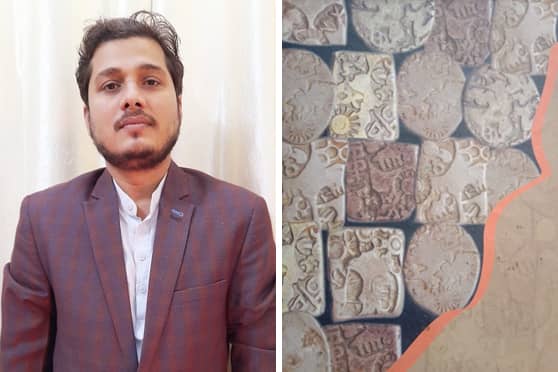 A professor of history at Banaras Hindu University (BHU) has received a grant from the Indian National Science Academy (INSA) to study the more than 2,000 years old Punchmark coins, considered India’s earliest coins.

Amit Kumar Upadhyaya, assistant professor in the Department of Ancient Indian History, Culture and Archaeology, Faculty of Arts at BHU, will be scrutinising coins found either by excavation by the Archaeological Society of India (ASI) or procured from personal collections. ASI already has 49 verified Punchmark coins, which will be a part of the study.

Numismatics or the study of coins offers one of the most reliable insights into the past. Numismatic study answers several economic and social questions.

Punchmark coins were widely in circulation all over India during the reigns of various dynasties.

“The coins which are to be studied were minted between 800 and 300 BC. The dynastic history of India is observed to have started around 600 BC, thus the Punchmark coins coincide with the beginning of the dynastic history of India. The study will be on local Punchmark coins belonging to regions in Uttar Pradesh. Later, I plan to expanding my study to different regions of India as well,” Upadhyaya said.

Even though Punchmark coins are common ancient coins that are found in India, there are several details about these coins that remain unknown. INSA appreciated the importance of the project as it would answer several pivotal questions.

“When you see a coin, the first question that comes to mind is who issued the coin and where did the coin come from? In the case of Punchmark coins, we have been able to associate them with the region they came from. However, we are yet to discover the issuing authority of the coins. We need to find out which dynasty the coins belonged to,” Upadhyaya said.

Another important fact that the study will reveal is if any foreign influences led to the minting of the coins. “There is a certain hypothesis that these coins were issued because of the foreign connection we had at the time. These coins may not be of local origin as the influence could be foreign,” said Upadhyaya, who is the joint secretary of the Numismatic Society of India.

Study of the metal used in the coins, as well as the designs punched onto the coins, will offer context to the socio-economic condition of India at the time.

Forgery poses a major obstacle in the study of coins. “These coins have antique value and there is a huge market for them in the country. So, they are often forged. There are two kinds of forgery of Punchmark coins — ancient forgery and modern forgery,” Upadhyaya said.

Ancient forged coins are ones that were forged in the past. These coins pose less of a problem as they are fewer in number and easily identified by numismatists.

Modern forged coins are tougher to identify. These coins are often bought by museums all around the world. “Spreading of these forged coins is a major problem that affects the authenticity of studies,” Upadhyaya said.

To ensure that the INSA study has accurate findings, Upadhyaya will be collaborating with BHU’s department of physics, geology and metallurgy. Metal testing of the coins will be conducted by the combined team as a part of the study.

“Numismatics is a dying discipline that needs to be saved and preserved. This is why studies like this are very important for the revival of the whole discipline,” Upadhyaya said.