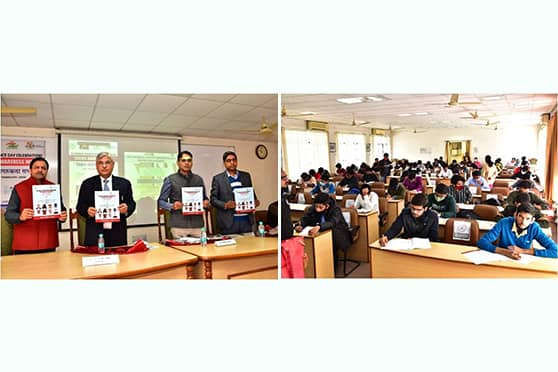 Faculty members with the brochure of the week-long programme organised by AMU’s department of Physics. Source: AMU Public Relations Office

Under the Synergistic Training programme, Utilising the Scientific and Technological Infrastructure (STUTI), the department of Science and Technology (DST) of Aligarh Muslim University (AMU) conducted a variety of activities ranging from workshops, screening sessions and quiz competitions for the Science Awareness Week.

While inaugurating the science awareness week celebrations, its chief guest, M U Rabbani, chairperson of the department at Cardiology Jawaharlal Nehru Medical College, AMU, said, “Science is useful for the betterment of society for example the discovery of penicillin changed the course of medicine and has enabled physicians to treat formerly severe and life-threatening illnesses.”

Rabbani narrated the stories regarding Newton and James Watt for their discovery and invention.

After the inauguration, a science lecture on “The Universal Laws of Thermodynamics Driving Life on Earth” was delivered by S S Z Ashraf from the department of Physics. He spoke about the fundamental laws of thermodynamics and their applications.

B P Singh, chairperson of the Physics department, in his welcome address highlighted the importance and usefulness of celebrating Science Awareness Week as part of Azadi ka Amrit Mahotsav.

M Wasi Khan introduced the STUTI initiative to the audience and students and discussed its main features and components.

In the first session, students took part in the “Science Fun through Science Quiz” which was based on a scientific theme. A short video film titled ‘Atomic Energy in India: Glorious past and Resplendent Future’ was shown to the students. Elocutions on science and technology and innovative ideas of students in science were also discussed.

After the demonstration, certificates, prizes and memorabilia for the winners of the quiz competition were presented to the students. Qazi Talha Ali received the first prize, Bhanu P Singh and Sadique Ilyas grabbed second and third prizes, respectively.