How to use inclusive language in your personal, professional and social lives 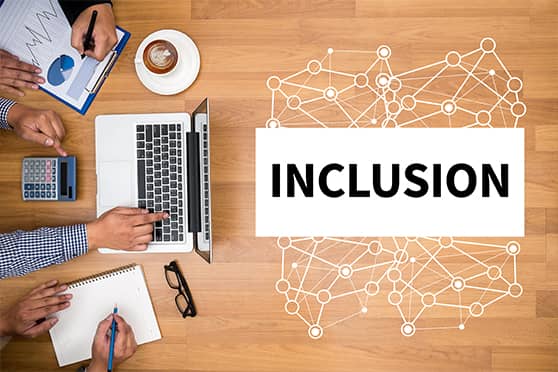 Language skills are part and parcel of social skills. Shutterstock

Advertisement
Summary
The 3 essentials of inclusive language are Pronouns, Generalisations and Vocabulary
Acts of inclusion or exclusion manifest in everyday language in micro-moments of one’s life

Diversity, Inclusion and Equity are buzzwords today and every major corporate house is investing heavily in building inclusive organisations. However, a certain percentage of non-male genders in the workforce or in leadership positions are not the only markers of inclusion. Acts of inclusion or exclusion manifest in everyday language in micro-moments in our personal, professional and social lives.

In a television debate, I was watching the other evening, a debater launched the tirade with, “You people.” Obviously, the debate ended up as a shouting match that led nowhere. The power of the personal pronoun was potent – it became an attack where “You people” were immediately called out as the outgroup. The term became an act of alienation and aggression.

I have worked on integration projects during Mergers & Acquisitions, where strong in-groups and outgroups were evident from the use of ‘They’s and ‘We’s. It is surprising but true that training workshops on simple “personal pronouns'' went a long way in identifying and resolving conflicts during the integration process. ‘You, We, They, Us, Our, Their, Your’ are not just elementary cogs in the grammatical wheel. They have the power to bring the wheel to a grinding halt.

Ukrainian president Volodymyr Zelenskyy’s message to Russia is a case in point – “Neighbours are always enriching each other culturally. Yet, that does not make them one entity, and does not separate people into ‘us’ and ‘them’.”

Vocabulary is an obvious exclusionary tool

Apart from grammatical elements like personal pronouns, vocabulary is another obvious exclusionary tool. We have become conscious of it today, and we use terms like ‘chairperson’ and ‘sportsperson’ instead of ‘chairman’ or ‘sportsman’. Norway is on its way to officially recognising a gender-neutral ‘third-person’ pronoun. It is expected to find its way into the dictionary by the end of the year.

But gender is just one type of exclusion. We can have exclusion baked into terms we use casually without even being conscious of it. While using words like “Don’t be blind”, “What a lame joke”, “You’re depressing”, “Blacklists and Whitelists”, we rarely pause to think that ‘blind, lame, depression, black’ are being used as derogatory terms; fallacies that need to be weeded out of the mainstream.

According to a report by McKinsey, in the post-Covid scenario, “workers will need to learn more social and emotional skills, as well as technological skills, in order to move into occupations in higher wage brackets.”

Language skills are part and parcel of social skills. People are ‘social agents’ who use language, not in isolation, but as a ‘vehicle of communication’ to establish connect with others.

Three Essentials in our Language Toolkit for ‘inclusive language’ are:

Language is symptomatic of mindsets, beliefs, values and habits that are deeply ingrained within us. These embedded features may take long to transform but one can take an outside-in approach as well. If one starts using inclusive language consciously and sensitively, finally, it is bound to move inwards and chip away at exclusionary mindsets and habits.

Dolon Gupta is a consultant specialising in Communication, Culture and Soft Skills. She is the co-founder of Business Communication Facilitators Association of India (BCFAI)

4 Popular Job Sectors to look out for in Aviation Management

Study Abroad: What Students Can Expect In Their First Week Abroad