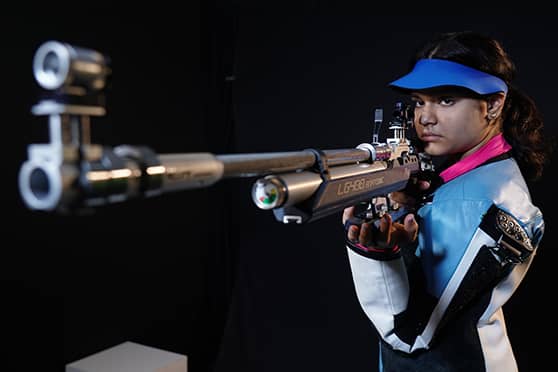 When Khwaish Sharma signed up for air weapon shooting at The Newtown School three-and-a-half years ago, she had no idea that the sport would become an integral part of her life.

The Class X student has played at the national level for championships like Indian Team Trials 1 & 2, 2022. She recently won the Edugraph 18 Under 18 Awards for Air Weapon Shooting and also bagged the Popular Choice award.

Air weapon shooting, Khwaish explains, is an Olympic sport that involves shooting on targets. “We have two types of targets here. One of them is a paper target and the other one is an electronic target. I do electronic targets now. It’s a higher level of shooting compared to the paper one. You have to pass a certain category where you are taught about the safety measures of the sport and then you can participate in competitions,” she said.

Beginning of the journey

It was her coach in school who spotted Khwaish’s potential in late 2017and asked her to take up the sport seriously. “Soon I started rejoicing in my achievements. I have been training for about three-and-a-half years now at Joydeep Karmakar Shooting Academy (JKSA) in Kolkata. I train under my coaches Joydeep Karmakar and Monojit Karmakar,” the young shooter said.

“I started off with an Open Site Rifle and qualified for the top level in the state. Right now, I play nationals and take part in the Indian team trials. I have won numerous medals in the President Cup Air Weapon Shooting championship, which are usually regional competitions. I also have several state-level medals as well.’ 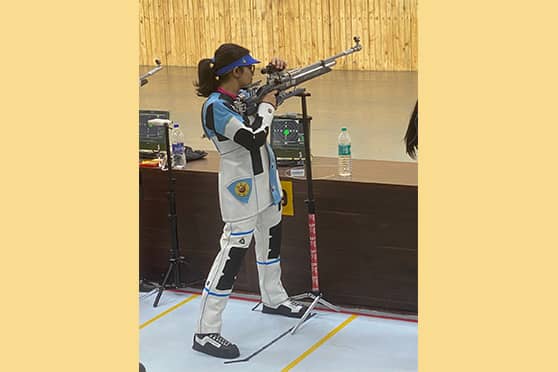 Khwaish enjoys both sports and studies and finds a way to balance them. The Class X student admits that it seemed difficult initially but later got used to it. “It is very hectic. I have school from around 8am to 11.30am and then I go to the range to practise till 8.30pm. I come back and have tuitions before going to bed. I really exhaust myself at the range. But this sport has improved my concentration levels and that has helped in my studies too,” she said.

Air weapon shooting has also impacted Khwaish’s personality. “I used to be very mischievous. But this is a game of concentration and it has taught me to keep calm. I am more mature now and clearer about my choices. The sport broadens my prospects,” Khwaish said.

The Newtown School principal Satabdi Goswami Bhattacharjee described Khwaish as “focused and ebullient”. “She is an ace air weapon shooter and has brought home many a laurel. She has made her mark in the sport and done us proud. Her persistence, dedication and industry will take her a long way,” Bhattacharjee said.

The pandemic and lockdown disrupted Khwaish’s practice schedule. But with support from her parents, school and the shooting academy, she managed to keep going. “My parents were very supportive during the lockdown. They installed an electronic target at home so that I could practise. My academy also accommodated a few shooters to practise at the range. The school provided us with provinces to practise in. So that was very helpful,” Khwaish said.

Edugraph 18 under 18 and Popular Choice Awards

Any recognition is a morale-booster that encourages Khwaish to push herself and better her performance. “Anything related to awards and medals adds importance to my life. It makes me feel like I’m doing a better job. It enhances my confidence. I feel like it will help me achieve a better goal in future,” she said.