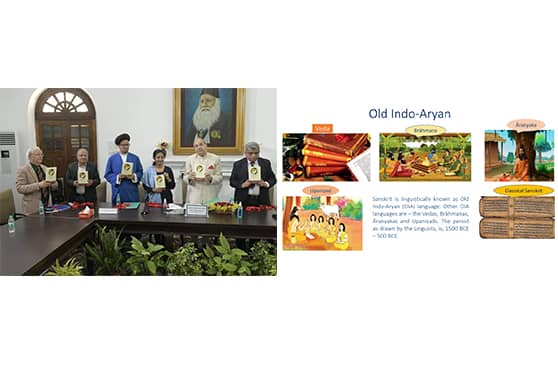 Distinguished scholar of Sanskrit, Prakrit, and Pali languages, JR Bhattacharya recently delivered lectures on Indo-Aryan literature at the Indian Institute of Technology (IIT) Gandhinagar as a part of a lecture series under the Indian Knowledge Systems (IKS) – an elective humanities and social sciences course offered by the institute.

Bhattacharya is currently associated with the Department of Sanskrit, Pali, and Prakrit at Visva-Bharati, Santiniketan, West Bengal. He taught for more than 25 years at Jain Vishva Bharati Institute, Ladnun in Rajasthan. The two lectures delivered by Bhattacharya were titled ‘Jain Canonical Literature’ and ‘Prakrit Dramatic Literature’

Bhattacharya has published several articles and books in historical linguistics, Jain canons, and Jainism, including the translation of Dashavaikalikasutra, Hemachandra’s Prakrit Grammar, and publication of the manuscript of Prashnavyakaranasutra. He is an associate member of the Centre of Jain Studies, School of Oriental and African Studies, University of London, UK, and a member of the Board of Development of Prakrit Language, Union ministry of human resource development.

The second session by Bhattacharya highlighted the Prakrit dramatic literature. Bhattacharya said, “The many varieties of Prakrit and their sub-dialects used in the dramas of the ancient period depict the beautiful cultural status of the society of those times.”

He also read out and explained excerpts from several Prakrit texts. The sessions concluded with question-and-answer sessions.